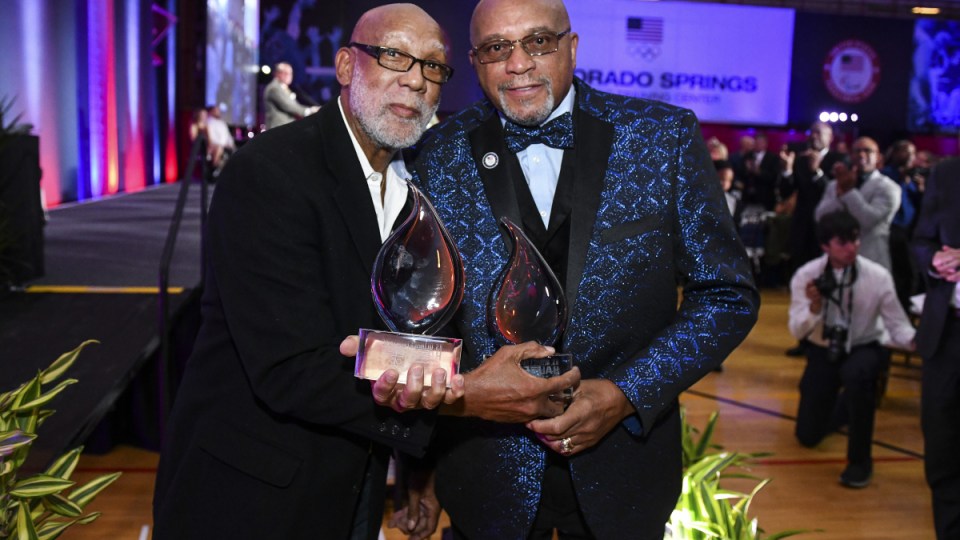 John Carlos (L) and Tommie Smith after being inducted into the US Olympic Hall of Fame. Photo: Getty

More than 50 years after being sent home from the 1968 Mexico City Olympics for their raised-fist protest, Americans Tommie Smith and John Carlos have received a long-awaited moment of redemption.

Rebuked as unpatriotic for using the Olympic platform to make a political statement, the former sprinters on Friday were inducted into the US Olympic and Paralympic Committee’s Hall of Fame.

After walking the red carpet ahead of the induction ceremony in Colorado Springs, Colorado, Carlos discussed how his day of recognition from the USOPC finally came to pass.

“We realised that after 51 years the greatest invention was not the plane, not the TV, not the telephone but the eraser,” the 74-year-old said.

“To realise that we can make mistakes in life and there should be no shame. I think the (USOPC) has come to that point.”

Smith and Carlos finished first and third, respectively, in the 200 meters final and then launched an unprecedented protest on behalf of oppressed black American when they took to the podium with heads bowed and black-gloved fists raised skyward.

Australia’s Peter Norman, who won silver, stood with them in a show of solidarity wearing a badge supporting human rights.

Long before US President Donald Trump called kneeling NFL players “sons of bitches” Smith and Carlos bore the brunt of the backlash for taking a stand against racial discrimination.

It meant jeopardising their careers and reputations.

But Carlos was crystal clear when asked if he would change anything if he could go back in time.

The protest, which occurred amid the civil rights movement in the United States and not long after the assassination of Martin Luther King Jr, cost Carlos and Smith dearly.

At home they were heroes to their contemporaries and pariahs to the establishment.

Both were suspended from the US Olympic team and sent home, where they received death threats and hate mail.

“We sacrificed our careers but we helped so many others,” said Carlos.

“If you’ve done the right thing and haven’t disrespected anyone and you believe that you can make a significant change for society for the better you should take the initiative to do that,” he added.