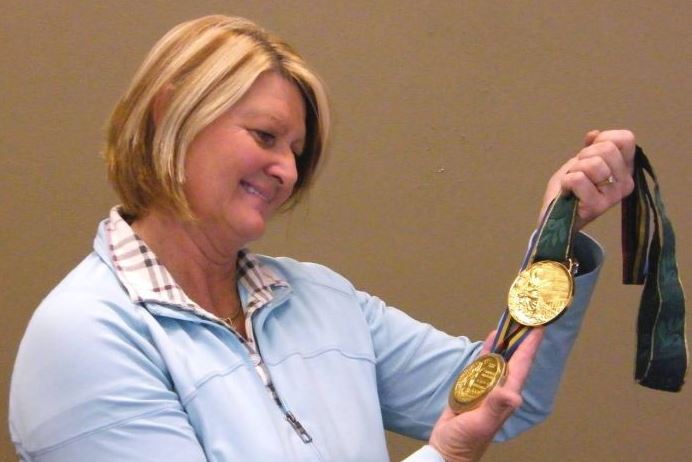 Gillian Rolton cherished the medals she won at the 1992 and 1996 Olympics. Supplied

One of the world’s most accomplished equestrians, two-time Olympic gold medallist Gillian Rolton has died in Adelaide at the age of 61.

Early in October she revealed she had been battling endometrial cancer for two years.

At the Atlanta Olympic Games in 1996, she rode to a second Australian team gold medal, even though a fall five minutes into the event left her with a broken collarbone and fractured ribs.

Her beloved mount Peppermint Grove — or “Freddie” — had lost his footing and although she got back into the saddle, she fell again at the next jump.

“I’m coming into this water jump thinking, ‘I don’t feel too flash … but kick on’, and as I’m trying turn my left arm didn’t want to work and I couldn’t really breathe,” she later recalled.

“You go to the Games because you’ve got to get through those finish flags no matter what.”

Rolton won her first Olympic gold medal four years earlier, in Barcelona, where she was a late inclusion in the team.

“There were seven of us in Australia who mortgaged everything,” she said.

“[We] did the chook raffles, the fundraising events. I was teaching, I was cleaning stables, I was doing all sorts of things to pay for Freddie’s board and he had the best of everything. I certainly didn’t.

Rolton did not compete at the 2000 Sydney Olympics, but was a proud flag-bearer.

Chair of the TDE Dr Felicity-Ann Lewis said the event would become a celebration of the life and contribution of Rolton.

“The name Gillian Rolton is forever linked to the sport of Equestrian in Australia and this event will forever be remembered for the stamp that Gill put on it,” Dr Lewis said.

“While we mourn a dear friend and a remarkable colleague, we also want to take the time with the South Australian public and competitors and friends from across the globe to celebrate Gill’s achievements and the sport that she loved.

“She worked tirelessly as event director to ensure that the world knows about Adelaide and the unique equestrian event that is hosted in the heart of this beautiful city.”

Rolton continued working from her hospital bed to make sure the 2017 three-day event was the best.

“It’s about giving myself goals and working to those goals and trying to balance life with … making the most of every day I have,” she told Channel 7’s Today Tonight.