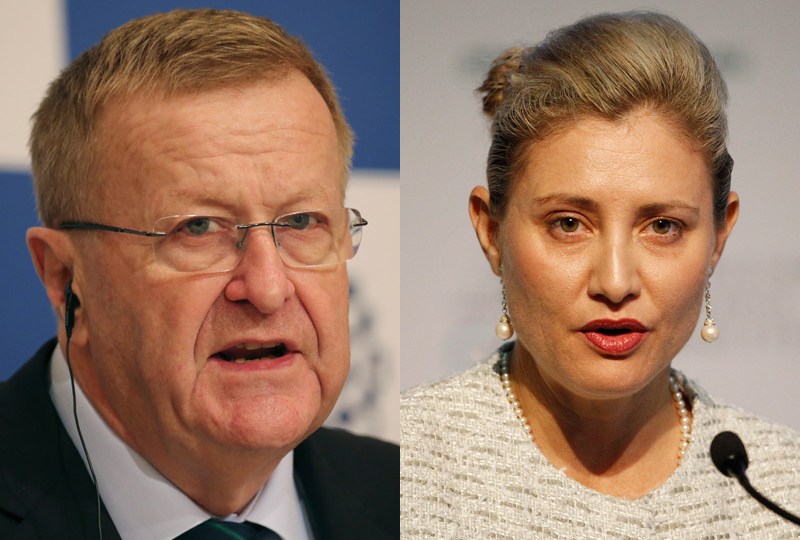 The former chief executive of Australia’s peak Olympic body believes nothing can change the organisation while John Coates remains in the executive president’s chair.

Ms De Jong’s call comes after the damning independent review into the organisation released this week.

She says she accepts her portion of the blame but others must accept theirs too.

Speaking to the ABC’s The Ticket, Ms de Jong said many of the recommendations made in The Ethics Centre report reflected the changes she tried to introduce as in the two-and-a-half years she was chief executive.

“I am of the belief that every person in an organisation needs to accept some level of responsibility for the culture of the organisation for which they work,” she said.

It is not a view shared by Coates, who washed his hands of any responsibility this week, blaming “dysfunctional leaders” including the former chief executive.

Coates originally praised Ms de Jong when she left the organisation, stating she was “one of Australia’s top sports administrators”.

That view soured earlier this year when Ms de Jong went public regarding an official complaint she had lodged against longtime Coates minder, Tancred.

An investigation into a number of bullying allegations made against Tancred is due to be finalised next week.

“When I tried to introduce meaningful change throughout the organization there was certainly a will on behalf of many of the staff to embrace that but there were some individuals that worked to actively obstruct my efforts,” Ms de Jong.

“Unfortunately, I would say there was no appetite for meaningful change from the very top of the organization.”

She was asked to confirm whether it was Coates she was referring to as “the very top of the organisation”.

“Yes. I worked like hell to try to change the culture that I inherited and I lost count of the number of initiatives I tried to introduce and the efforts I went to try to address that.

“As anyone who has ever tried to change the culture within an organisation would know it takes a collective will to do so and in my experience that didn’t exist.

“The times when I raised issues about behaviour it was met with a response that some individuals were too important to lose and in fact my authority over them was removed.”

Current chief executive Matt Carroll says he has been given full responsibility to bring about all 17 changes recommended in the review.

He said he was not surprised that some staff and stakeholders had expressed the view that “the President exerts an overriding influence or control over the organisation”.

Of the 45 national sports federations that make up the Olympic sports only 12 voluntarily returned the survey linked to the independent review. When asked how Carroll interpreted the apathy he said it could be read a number of ways.

“I’ve been around and I’ve met around 25 of the sports to date and I’m meeting some more next week and the week after,” he said.

“The message I’m getting from them is they are still respectful of the AOC but, yes, they want us to listen more; they want us to work with them closer; they want us to represent them better — so I’ve got their messages loud and clear anyway.”
John Coates at an AOC media conference in Sydney August 23, 2013.
Photo: Coates blamed “dysfunctional leaders” for the culture of the AOC. (Reuters: David Gray)

One of nine key stakeholders who agreed to be interviewed for the report was John Bertrand, the president of Swimming Australia — a sport that had its own cultural review following team issues at the 2012 London Summer Olympic Games.

He told The Ticket he was surprised the AOC president took no responsibility for the organisation’s workplace environment.

“The vision and the culture is really set from the top down and I was concerned, to be frank, by the lack of acceptance by John Coates in terms of responsibility,” Carroll said.

“I just would have liked John to acknowledge the fact that as the executive chairman and president of the Australian Olympic Committee that the buck stopped there.

“So there is, you might say, quite a lot of disruption required to bring it into a modern, high-performance team, to be honest.”

Bertrand was asked whether Coates could have accepted a level of responsibility without having to resign.

“I think the best way to answer that is we’re hopeful and we’re positive that with Matt Carroll being empowered as a result of all the things that have happened over the past several months that we’re going to see major change — and we expect that to happen.”

Carroll said he is now in charge of all areas of the AOC’s business.

Coates currently appears to have complete confidence in his new chief executive, unlike those who came before him. Coates this week described the former chief executive as “the hand I was dealt”.

“I find it disappointing and difficult to accept that the President can exclude himself from any responsibility for the culture of an organisation over which he has presided for 27 years; an organisation over which he is the chair of the executive, or the board; over which he does the hiring and the firing of the chief executives and senior management; for which he does the key appointments of leadership of our Olympic teams; and that he himself has described, or defended, his executive presidency’s salary in excess of $700,000.

“He is an executive president and is required to be actively involved in the running of the organisation.

“If he’s willing to be paid as an executive president one would suggest that there ought to be responsibilities that go with that.”

Ms de Jong said she also recognised the capability and commitment of many staff that offer hope to the organisation.

“As someone who worked for 12 years to promote and protect that very organisation I more than anyone hope that meaningful change can come about.

“However I would also say that I have a genuine concern about the ability for that meaningful change to occur so long as the current executive president is in place.”