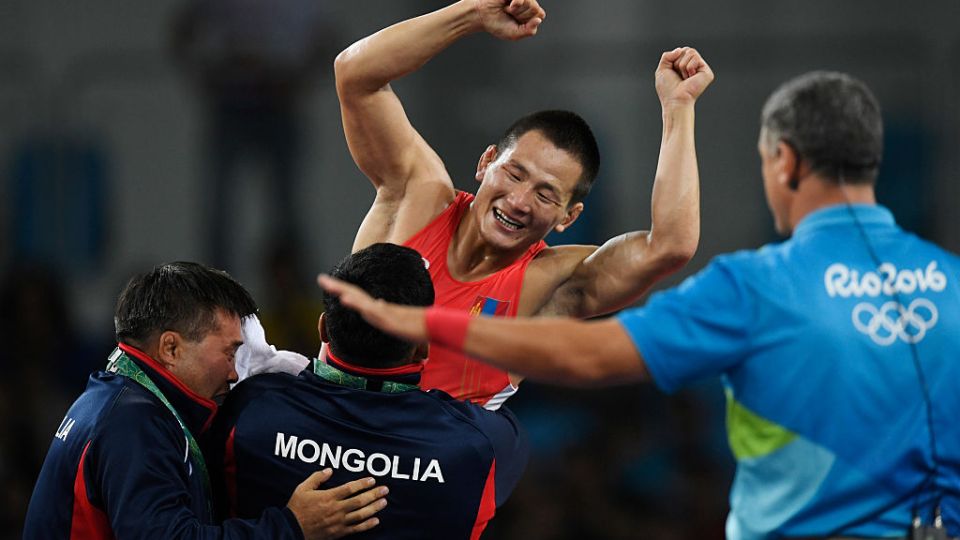 A pair of Mongolian wrestling coaches have made a late claim for the most bizarre act of the Rio Olympics, protesting a contentious loss by stripping off their clothes.

Ganzorigiin Mandakhnaran initially thought he had won his bronze medal match against Ikhtiyor Navruzov of Uzbekistan before his joy turned to heartbreak when the judges penalised the Mongolian, who was leading 7-6, for refusing to engage with his opponent.

The coaches tossed a challenge flag, but after being told by the judges the call couldn’t be challenged, they began to disrobe.

Ethiopia’s Feyisa Lilesa has used his silver medal performance in the men’s marathon to make a powerful protest against his government’s treatment of his Oromo tribe.

Lilesa held his arms up over his head and crossed his wrists as he crossed the finish line.

“If I go back to Ethiopia maybe they will kill me. If not kill me, they will put me in prison. I have not decided yet, but maybe I will move to another country.”

Feyisa Lilesa won a silver medal in the @Olympics. His bravery in protest is extraordinary: https://t.co/JLEaslRYbx pic.twitter.com/sxCZunb052

She was one of the genuine stars of Rio, but there’s only one thing that makes American gymnastics wunderkind Simone Biles nervous.

“I’m afraid the flag is going to be too heavy for me,” the 19-year-old superstar said.

“Michael Phelps is so much taller and he seemed to carry it so easily, and I’m very short. So I’m a little worried about that part.”

Fortunately it went off without a hitch.

There’s been plenty of tears at Rio – of joy and despair – but British taekwondo silver medallist Lutalo Muhammad produced arguably the most heart-rending reaction of the Games.

After a narrow loss to Ivory Coast’s Cheick Sallah Cissé in the men’s 80kg final, Muhammad was overcome with emotion in a phenomenally earnest interview that sums up exactly what the Olympics mean to the athletes.

Fiji Rugby Sevens coach Ben Ryan received a message of support from an unlikely source ahead of his team’s gold medal final – the second man to set foot on the moon.

“After the [semi-final] I got a text message from Buzz Aldrin … saying how great Fiji had played,” Ryan told a huge crowd in a rousing speech back home at Nadi’s Prince Charles Park.

So the national stadium is already full and we still have these guys with us! pic.twitter.com/LNr5FTopGL

New Zealand runner Nikki Hamblin and US rival Abbey D’Agostino have been bestowed with one of the rarest honours an Olympian can receive, awarded the Pierre de Coubertin medal in recognition of their good sportsmanship during a dramatic 5000m heat.

The prestigious Pierre de Coubertin medal has only been awarded 17 times since 1964.

The two Olympic greats caught up with one of Rio’s most star-studded selfies after Farah’s incredible victory in the 5000m on the Games’ penultimate day.

The Channel 7 team has done a bang-up job of covering the Rio Games for Australia – but across two weeks and hundreds of hours of filming, there’s bound to be a few blunders.

Here’s some of the commentary team’s work that wasn’t quite up to Olympic standard.

"What's my name?" Not everything always goes to plan for the commentary team… #Rio2016 https://t.co/ZKdgsG0kk1