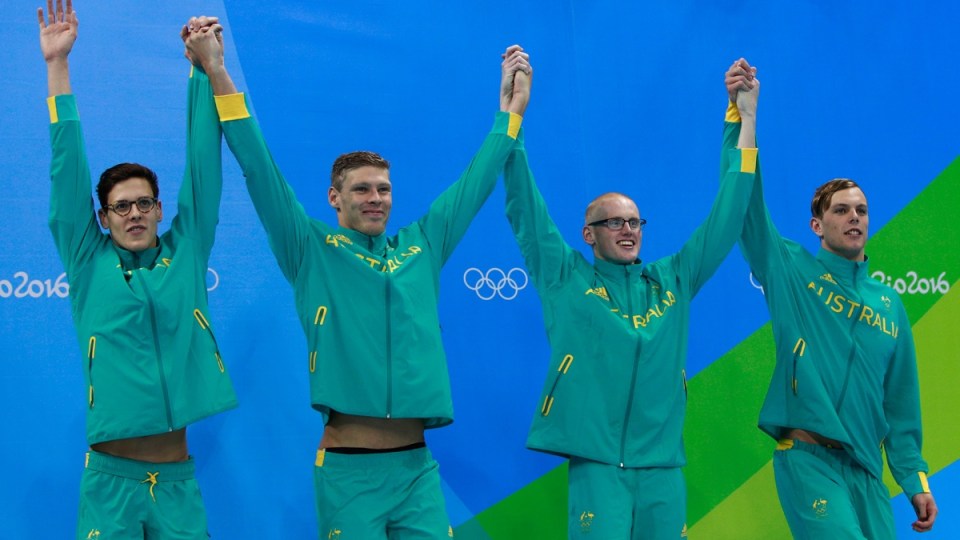 Australia celebrate their silver medal in the relay. Photo: Getty

Kyle Chalmers showed why he is swimming’s next star with a brilliant performance that guided Australia to a bronze medal in the men’s 4x100m medley relay on Sunday.

The 18-year-old – who won a surprise gold medal in the men’s 100m freestyle in a time of 47.58 seconds – obliterated that time in the anchor leg of the relay.

And his 46.72 second split pushed Australia into the medals, behind the Michael Phelps-led United States, who won gold, and Great Britain, who took silver.

Putting Chalmers’ swim into context is the fact that the men’s 100m freestyle world record is held by Brazilian Cesar Cielo, who needed just 46.91 seconds to complete the race at the 2009 world championships in Rome.

Because Chalmers’ swim was not recorded in a 100m freestyle race, he will not claim the record, but it was a supremely positive sign about the South Australian’s future on an otherwise disappointing day for the Australian swimming team.

“They [other nations] were a fair way ahead when I dove in,” Chalmers told the Seven Network.

“Yet again [I] had another good turn and worked my back end [of the race] like I did and yeah, happy with that split.”

When asked to reflect on his Olympic experience, Chalmers added: “I can’t believe it.

“It’s amazing tonight, standing up and getting a medal with these guys.

“I was lucky enough to swim the heat with these same boys last year and getting to swim the final this year was just an incredible experience for me.

“It has definitely motivated me going forward.”’

Chalmers was joined by Mitch Larkin, Jake Packard and David Morgan in the relay team.

Victory for Phelps was the ideal way for him to say goodbye on the Olympic stage, with the American swimmer set to finish his career with a staggering 23 gold medals.

Silver for the women

The result followed Australia’s women claiming silver in the 4x100m medley relay of their own.

Cate Campbell, swimming last for Australia in the freestyle component of the race, entered the water with her team in fifth.

But a sizzling 52.17 second split – more than a second quicker than she swum in the 100m freestyle final, in which she finished sixth – helped Australia to second place.

Again it was the United States who won the race.

“I knew I was going to be diving [in] a bit of time behind. I did not panic.”

‘The greatest choke in Olympic history’

Earlier, Campbell was scathing of her Games performance after finishing fifth in the women’s 50m freestyle final.

She was favourite to win both the 50m and 100m events heading into the Games but had no answer for Denmark’s Pernille Blume (24.07secs) over the shorter distance on Sunday.

“It wasn’t my best but it’s fair to say that this week hasn’t been my best,” Cate Campbell told the Seven Network.

“The world got to witness possibly the greatest choke in Olympic history a couple of nights ago [in the 100m freestyle].

“It hurts but maybe I’ll stick around for another four years.”

Bronte Campbell said: “I wish that final had gone differently. I’m not going to stand around and make excuses about injury and preparation.

“It’s just not what you are supposed to do. The only time you have failed is when you make starting excuses for your failures.

“I’m just going to keep battling on … I’ve come away from my 2016 Olympic campaign with a gold medal, which I got to achieve with my sister, so it hasn’t been a complete failure.”

Also on Sunday, Mack Horton – gold medallist in the men’s 400m freestyle – finished fifth in the 1500m edition of the same discipline.

Horton (14:49.54secs) was just under 15 seconds behind race winner, Gregorio Paltrinieri of Italy.