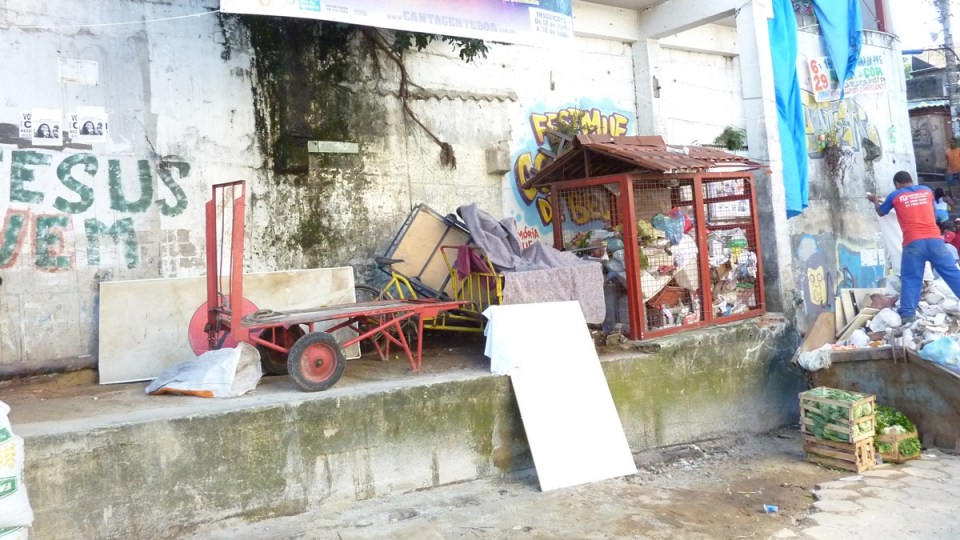 I can’t help but be nervous.

I’m in Rio de Janeiro and am walking into one of the city’s famed favelas.

The communities – which are dotted throughout the city and are brick houses stacked on top of each other like poorly constructed Lego – have garnered an infamous reputation over the years.

For many years, they were a no-go zone to outsiders. Particularly tourists.

I’m keen on seeing what exactly favelas are like, though, and if they live up to the hype.

I am in Cantaglo, a favela located on a steep hillside.

At the bottom of the hill, there’s a queue waiting for the ‘moto-taxis’ and small passenger vans that take locals up through the narrow roads into the hills.

I am going to walk, though.

“It’s the best way,” says Bruno, a Brazilian who is showing me around.

Bruno has lived in Cantaglo since he was a child and tells me that “we are here to see normal life … how everyone lives and works”.

What that entails, I’m not exactly sure.

But what I do know is that Cantagalo has been ‘pacified’ since 2009.

It’s one of many favelas across Rio where the government and security forces evicted the drug cartels and the gang lords.

It was part of a concentrated strategy ahead of the 2014 World Cup and these Olympic Games.

And you can’t miss the police presence in Cantaglo.

A large station is placed right in the middle of the favela.

It’s been a big change but Bruno tells me that Cantagalo was never a hugely violent place.

He says that even the former gang kingpins used to insist on no crime in the favela – a code that has existed for a long time.

“I always say you are more likely to lose something down there [at the beach] than inside the favela,” Bruno says.

“Here it is a lot of people just living their lives, day to day, working hard.”

There is a rusted, burnt out car that would only be seen in a junkyard in Australia.

We spot a pile of wood and aluminium – which, I’m told, is someone’s residence.

Kids gather on street on corners. One group has marbles (remember them?), while another plays football in a narrow alleyway.

It’s hard to believe events at the Olympic Games – the biggest sporting event in the world – are taking place just a few kilometres away.

While the world’s best athletes compete, tourists and fans lug bulging bags of souvenirs and gifts to deluxe hotels.

Here, locals are just going about their business.

Bruno says he is “proud” that Rio is hosting the Olympics.

“But I don’t know many people here that have tickets or will go,” he adds.

The Olympic locations – scattered across the city – aren’t easy to get to and even the cheapest seats are beyond the reach of many, who live on strict budgets.

One of the reasons I’ve come to Cantaglo is to find out just how the Games are affecting their lives – if at all.

And I do come across scattered evidence of its existence.

There’s some posters around, and a few flags, too.

I pass two policemen – with their fingers cocked on the trigger finger of machine guns – peering at a small television broadcasting gymnastics.

Other locals are gathered around watching a volleyball match featuring Brazil. And they’re cheering loudly.

“We didn’t want the Olympics,” one says through translation.

“There are so many things we need, this city needs, and we don’t have money for those things.

“But we won’t stop watching or supporting. It’s part of being Brazilian.”

While there is a tangible buzz across most of Rio, for many locals, the Games might almost pass them by.

“We have many more things to worry about,” Bruno says.

“We want to know what happens next. What happens when everyone goes home.”