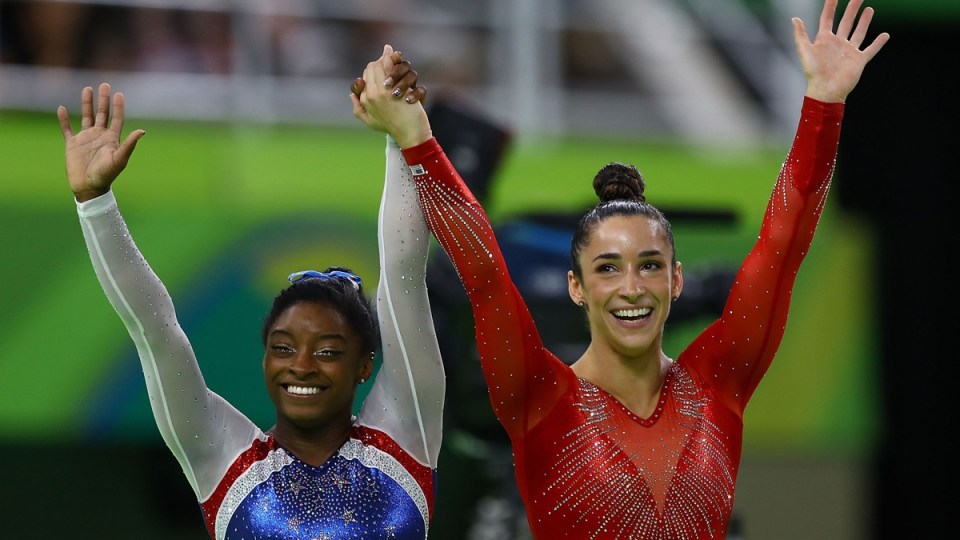 Biles and Raisman wave to the crowd after their final. Photo: Getty

Two medal triumphs on Day 7 of Rio 2016 – in very different disciplines and circumstances – highlighted the overwhelming passion and emotion of the Olympics and emphasised why it is the greatest sporting event on earth.

American gymnast Simone Biles and the Fiji Rugby Sevens team, both were competing at their first Games, blew their opposition away in Rio to secure widely expected golds.

But it was the tearful celebrations that followed that underlined the importance and significance of the Games.

Aly Raisman finished with the silver medal behind USA teammate Biles in the women’s all-around competition.

Yet Raisman has captured just as many hearts around the world as Biles and the Fiji Sevens team for the unbridled emotion she showed after realising she had secured second place.

As for Biles, well, the 19-year-old’s list of achievements is extraordinary.

Her winning margin of 2.1 points ahead of Raisman is larger than the margin of victory from the 1980 to 2012 Olympics combined, and she is consequently being called the greatest gymnast of all time by some pundits.

Like so many Olympic champions, Biles comes from a difficult background.

Her birth mother, Shanon Biles, was unable to care for Simone and her three siblings due to drug and alcohol addiction.

In 2003, Shanon’s father and stepmother, Ronald and Nellie Biles, adopted Simone and her younger sister, Adria.

“My daughter is an Olympic Champion and I am so proud,” Nellie said.

“She has worked for this and dreamed of it. And now it is here, all I can say is she deserved it.”

The teenager, who could leave Rio with five golds, put a lid on the hyperbole swirling around her crowning victory by declaring, “I’m not the next Usain Bolt or Michael Phelps. I’m the first Simone Biles.”

Raisman had different reasons for her spine-tingling reaction.

The 22-year-old from Massachusetts won gold in the team and floor events and a bronze on the balance beam in London four years ago, but a medal in the big one – the individual all-around – eluded her. She was beaten into fourth in a tiebreaker with Russian Aliya Mustafina who, ironically, finished behind Raisman in Rio to collect back-to-back all-around bronze.

Needing an excellent floor routine to atone in Rio, Raisman produced exactly that – and the outpouring of emotion was instantaneous after she realised she had secured a podium finish. Her reaction provided some of the most poignant images of these Games so far.

Few gymnasts make it back for a second tilt at an Olympic medal, and Raisman’s watershed moment was a victory for the underdogs.

“This is something you dream in your wildest dreams,” she said.

“I didn’t always think I was good enough, and that’s why I worked so hard.”

The gymnasts have helped USA become the first country to win 1,000 all-time Olympic gold medals during these games; the Fiji Rugby Sevens team’s rollicking success was the first Olympic medal of any kind for the island nation.

Fiji came to a standstill to watch their team obliterate Great Britain 43-7 in the final, which was followed by dancing in the streets of Suva, and a euphoric – yet deep spiritual and moving – celebration on the field by the victorious players.

After jumping into each other’s arms when fulltime siren went, the Fijians gently wept as they came together and sang a hymn.

It was poetic that the inaugural men’s Rugby Sevens gold went to the two-time defending world champions and by far the most successful country in the sport’s history, but Fiji’s maiden Olympic medal was a success the entire world could rejoice in.

There are similar, but distinctly unique, narratives laced throughout the Rio Games – upset wins, anticipated victories, inspiring comebacks – that all provoke unchecked emotion.

They are the stories that solidify the Olympic magic that lures so many of us in every four years.

Gymnasts and Fiji showcase the magic of the Games