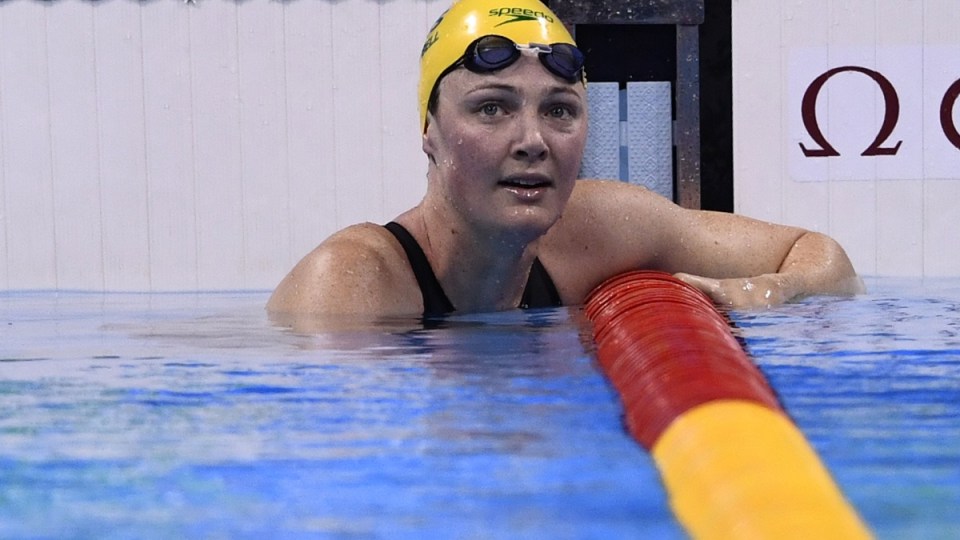 Cate Campbell realises she has not won. Photo: Getty

Campbell’s time of 53.24 seconds – more than a second outside her own world record – was not enough to finish with a medal, while her sister, Bronte, was fourth after finishing in 53.04 seconds.

Canadian Penny Oleksiak – just 16 years of age – and American Sarah Manuel will both get gold medals after finishing in 52.70 seconds, breaking the Olympic record set by Cate Campbell in the semi-final.

“Not as much as it’s hurting right now. I have still got the 50m [freestyle] to go.

“I have always said that I didn’t need a gold medal to have self-worth. That’s being put to the test at the moment.”

Cate Campbell broke the Olympic record not once – but twice – on Thursday, in the heats and her semi-final.

And she looked good for gold at the halfway mark, something which is becoming a common theme for Australian swimmers in Rio.

While Cate was leading after 50m, Bronte was second, raising hopes of a one-two finish for the sisters before the rest of the field stormed home.

Bronte Campbell said she and her sister didn’t have “anything to be ashamed of” despite their failure to miss medals.

“I said to my coach before I left, I have already won [because] I get to swim in an Olympic final with my sister,” she said.

“The Olympics is not about winning – it’s about trying to win.

“I think that’s important. We both did our best. I have no regrets.

“Obviously you want the result to be different.”

Cate Campbell then thanked Australian fans for their support and asked the country to “still love” her.

“I know there are a whole heap of people who are watching back home,” she said.

“I love you and this doesn’t change how you should feel about me.

“So, please still love me.”

Campbell is still a strong chance of winning the women’s 50m freestyle on Sunday.

She will also play a key role in Australia’s chances in the women’s 4x100m medley relay, also on Sunday.