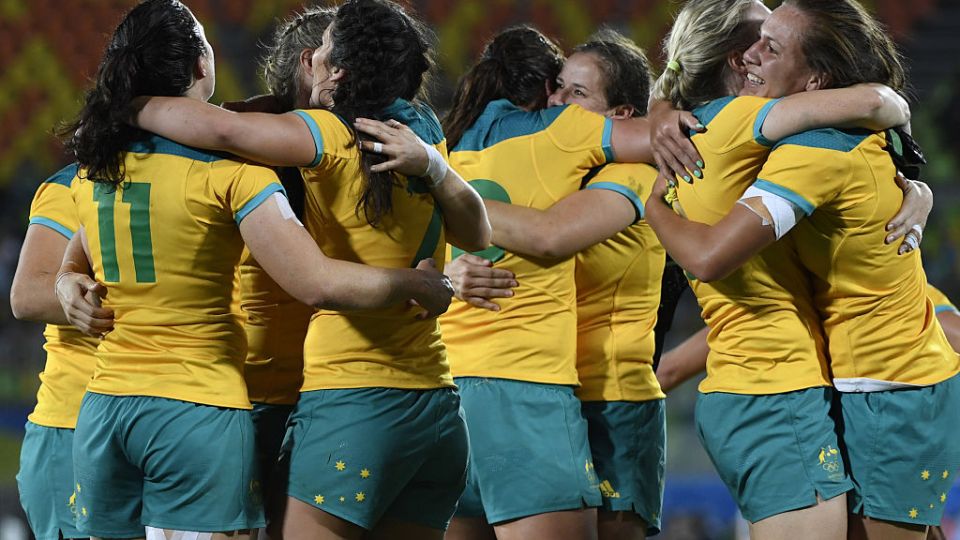 A four-tries-to-three effort against its trans-Tasman rivals set up Australia’s triumph at the Deodoro Stadium, a historic moment in what is the debut of rugby sevens at the Olympics.

The rugby triumph puts Australia back up to second on the medals table, equal on gold with China who claim top spot with more silver and bronze.

“Obviously a very good start to the Games but it’s a marathon not a sprint.

“We’ve started off with two fantastic days and the feeling within the team is just great.”

How they won it

A knock-on from Australia gave the Kiwis the first scoring opportunity, as Kayla McAlister bust through for the opening try in the corner.

But Australia responded mid-way through the first half thanks to Emma Tonegato, who burst through the NZ front line before being hauled down just 10 metres from the tryline.

She backed up her efforts with another clean handle to make a diving try to tie the scores 5-5.

On the siren, Australia made a late surge after New Zealand player was sin binned for hands on the ball in an offside position.

The green and gold capitalised, finding Evania Pelite in space as she put handed her country a 10-5 halftime advantage.

The Aussies extended their lead to 10 as the world champions ran the length of the field with Charlotte Caslick handing off to Ellia Green who finished off the good work.

Caslick wrapped up the gold medal match with another try with four minutes remaining to hand Australia the inaugural rugby seven’s Olympic event.

The win vindicates the investment the Australian Rugby Union has made in women’s sevens since the 2012 Olympics in preparation for the sport’s maiden Games appearance in Rio.

Several of the squad had never picked up a rugby union ball until joining the program but now find themselves Olympic gold medallists.

The sevens team is made up of former basketballers, hockey players, athletes, touch footballers and a few rugby players. They’ve come together in stages since sevens was admitted to the Olympics in 2009, quickly gelling their multi talents into world champions and now Olympic gold medallists.

Australia headed into the Olympics as favourites to win gold after claiming the Women’s World Sevens Series in May.

Tim Walsh’s side made themselves world champions by winning the first four events of the six-legged series.

And that was enough to see them finish 14 points ahead of New Zealand in the annual competition.