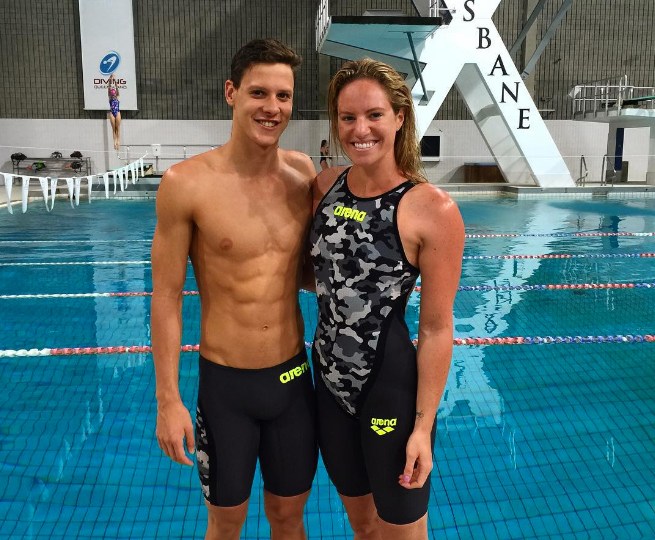 The swimmers have been going out since 2015. Photo: Instagram

There was Eamon Sullivan and Stephanie Rice and before them, Michael Klim and Giaan Rooney.

Backstroke stars Mitch Larkin and Emily Seebohm are the latest swimmers to hook up, with the pair starting to date in the latter stages of 2015.

And they were about to become front-page news if everything went plan in the pool at Rio de Janeiro on Tuesday.

Unfortunately, it didn’t. Both were in contention for gold medals but while they both turned for home in the lead, neither won a medal.

The heartbreaking sight of the then-20-year-old bawling her eyes out poolside after winning a silver in London will forever stay with Aussie sports fans.

Seebohm, who blamed social media for her failure to win gold, won the event – and the 200m backstroke – at last year’s world championships.

She started sluggishly in her semi-final on Monday and scraped into the final in seventh place, but a much better performance is expected in the decider.

The 23-year-old – named the male world swimmer of the year – is also a world champion over the distance.

Helping each other with the stress

Seebohm says the fact that Larkin knows all about the highs and lows of being a professional swimmer helps their relationship.

“We understand what each other are going through,” she told Mamamia in April.

“It makes it so much easier when I can tell him one of my [swimming] sets and he’ll understand, whereas anyone else would think I’m talking in code.

“We relate to each other and have a really strong connection because of this.

“We’ll talk to each other about our worries. He’ll have a worry and often I find myself saying ‘oh yeah, I went through that a year ago, I’ve felt like that before and this is what I did. It’s really nice like that’.”

While the pair are obviously heavily invested in each other’s success, they do their best not to show it come competition time.

“We said we don’t want each other’s performance to jeopardise the other person.

“And the only way we can do that is the way we have been doing it for the last years [before we were a couple], to just focus on our own thing.

“As soon as we get to the pool deck, swimming comes first.

“I don’t want her to have to watch me swim. She’s got a job to do and she feels the same way with me.”

Seebohm added: “Basically, when we get on the pool deck, we’re not boyfriend and girlfriend, we’re just friends who know each other really well.”

The duo – who are also set to compete in 200m backstroke finals later this week – are not the only Aussie couple at the Games, but they are the highest-profile pair.

This story has been updated to reflect the results of Seebohm’s and Larkin’s events at the Rio Olympics on 9 August, 2016.