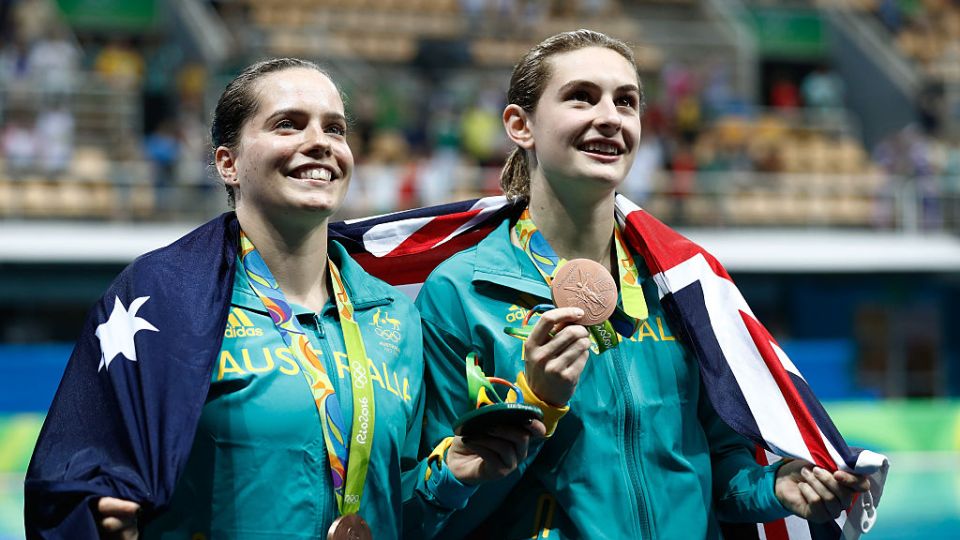 Maddison Keeney and Anabelle Smith were "in shock" after their bronze medal win. Photo: Getty

One has greatly struggled with nerves in the past, while the other has battled career-threatening injuries.

Maddison Keeney and Anabelle Smith live and train in different cities but contest an event that – as its name suggests – demands as perfect synchronisation as possible.

Yet on an overcast Rio afternoon, with winds strong enough to blow signage off scaffolding at the outdoor Maria Lenk Aquatics Centre, Keeney and Smith managed to win an Olympic bronze medal for Australia in the women’s synchro three-metre springboard event.

The fact they have persevered through so many setbacks gives you an indication of how they clawed their way back into the competition to eventually climb the podium.

Keeney and Smith were sitting in eighth and last position on the overall standings following the opening two rounds, a reverse dive pike on their second attempt failing to win over the judges.

A pep talk with the Australian coaching staff was enough to stave off any threat of panic and they rebounded to eventually put themselves in fifth place heading into the final round.

Diving before Canada, their chief rival for the bronze medal, Keeney and Smith coolly produced a score of 71.10 via a forward two-and-a-half somersault with a twist to move provisionally into third place.

The Canadians, Jennifer Abel and Pamela Ware, had developed a habit of edging out the Australians late in competitions, but on this occasion they fell short with Keeney and Smith scoring 299.19 to 298.32 on the final standings.

Keeney stares down threat of nerves

For New Zealand-born Keeney, she hopes the poise she showed in joining Smith to fight their way back into contention will help “silence the critics”, a reference to the suggestion she cannot handle the nerves of major competition.

Keeney recorded a score of zero on her final dive in the one-metre springboard final at last year’s world championships in Kazan, slipping from fourth to 12th and last place in the process.

Footage of her dive in Kazan cruelly became viral on social media but the 20-year-old is confident nerves will not be her undoing in the future.

“I’ve had lots of problems in the past but I think that I have grown a lot as a diver over the last couple of years and months,” said Keeney, who was making her Olympic debut in Rio.

Smith, who alongside Sharleen Stratton was fifth in the synchro three-metre springboard at the London Olympics, had also faced the prospect she might never fulfil her potential.

The bubbly Smith had previously fought back from finger and rib injuries that prevented her from competing, yet she had never given up hope she could return to the sport she loves.

“My finger and my rib have both given me issues,” she said.

“But I’ve worked through them and I’ve spent my time on the sidelines watching everyone else dive and I can tell you it wasn’t a fun time.

“But to be standing here today with a medal around our neck makes it all worth it.”

Keeney and Smith have faced an additional obstacle, as they have lived interstate from each other since 2014.

Smith resides in Melbourne and Keeney in Brisbane, but occasionally their schedules align and they are able to train together in the Queensland capital.

Keeney’s Olympic program is not over, as she will take part in the three-metre springboard event on Friday (Rio time), while Smith is not contesting any of the individual events.