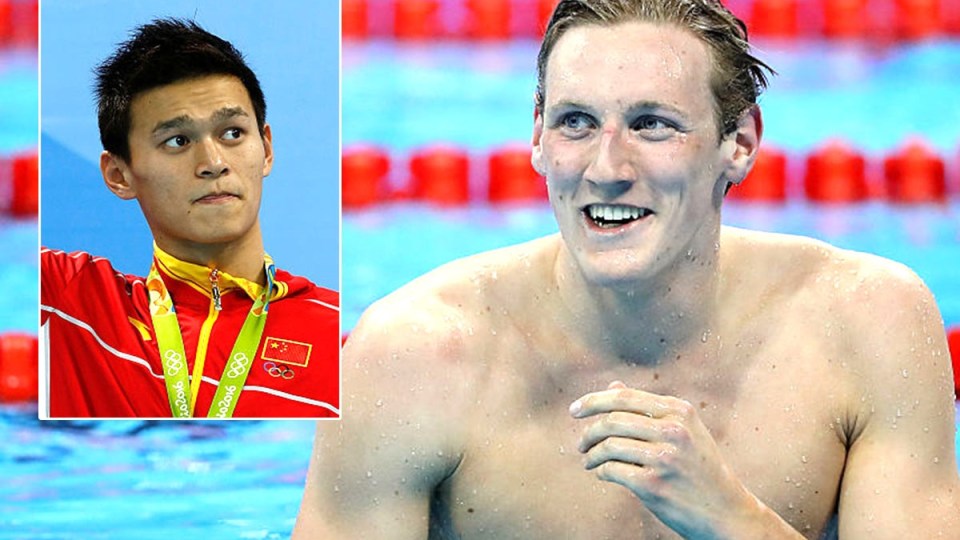 He’s sometimes known as ‘Mack the Knife’ – and Mack Horton’s cutting takedown of bitter rival Sun Yang would have felt like a dagger to the heart of the Chinese swimmer.

Horton delivered Australia’s first gold medal of the 2016 Olympic Games with victory in the 400m freestyle in a personal best of 3:41.55, edging out China’s defending champion (3:41.68).

It was a sweet revenge of sorts for the 20-year-old from Victoria, who described his gold medal success as a “win for the good guys”.

Sun served a three-month ban for testing positive to a banned stimulant in 2014.

“Your parents and whole country should be shame [sic] on what you’ve said,” one user wrote on Instagram.

Another wrote: “You even won the match, but you are still a loser, you don’t deserve to have an Olympic gold medal.”

@_mackhorton Your pathetic "victory" is built on calumny, ignorance and smear! SHAME ON U!!!! #apologizetosunyang

There had been bad blood brewing between the pair in the build-up to the final, after the Chinese had splashed water in the face of the Aussie during a training session at the Olympic Aquatic Centre earlier in the week.

“It kind of got played up in the media a little bit, he kind of splashed me to say hi and I ignored him because I don’t have time or respect for drug cheats and then he wasn’t too happy about that so he kept splashing me and I just got in and did my thing,” Horton said.

After the race, Horton – who ironically began swimming at 10 to help him overcome his fear of the water – told reporters that he had no regrets about calling out Sun.

“I don’t think it is a big statement because it is true, he has tested positive,” he said.

“No athlete has really come forward and said it.

“It wouldn’t have felt right if I raced against someone who had tested positive and didn’t bring it up.

Horton said he had planned the attack on Sun after reading Swimming Australia president John Bertrand’s account of his famous 1983 America’s Cup yachting triumph which ended 132 years of US supremacy.

“It was something I thought of beforehand,” he said.

“He kind of desensitised from it. Sun Yang is just the drug cheat.”

Absolutely bloody love seeing drug cheats getting beaten. Even better when it's an Aussie. Way to go @_mackhorton pic.twitter.com/aaAly8EQ3f

Horton’s strong stance drew criticism from Chinese fans on social media, with many urging the Aussie to apologise to Sun. Some of the more serious comments threatened Horton’s family, wished “divorce” on him and said he was going to die if he didn’t #ApologizeToSunYang.

The snake emoji was favoured by the Chinese trolls, as was the poo emoji and (curiously) the peach.

“You lost the spirit of the Olympic Games. And you are not qualified to be an athlete. Your comments represent your country obviously you have no idea about it. To insult, attack another athlete on your unreasonable imagination, you suck [sic],” one person wrote.

@_mackhorton You won the game, but you lost your character.You are loser. L-O-S-E-R

@_mackhorton your words were very rude! I HOPE you got the thing called brain! You are the LOSER!

Horton has a chance to add to his medal tally later in the meet when he competes in the 1500m freestyle and the 4x200m freestyle relay.

To find out more about Mack Horton, click here.