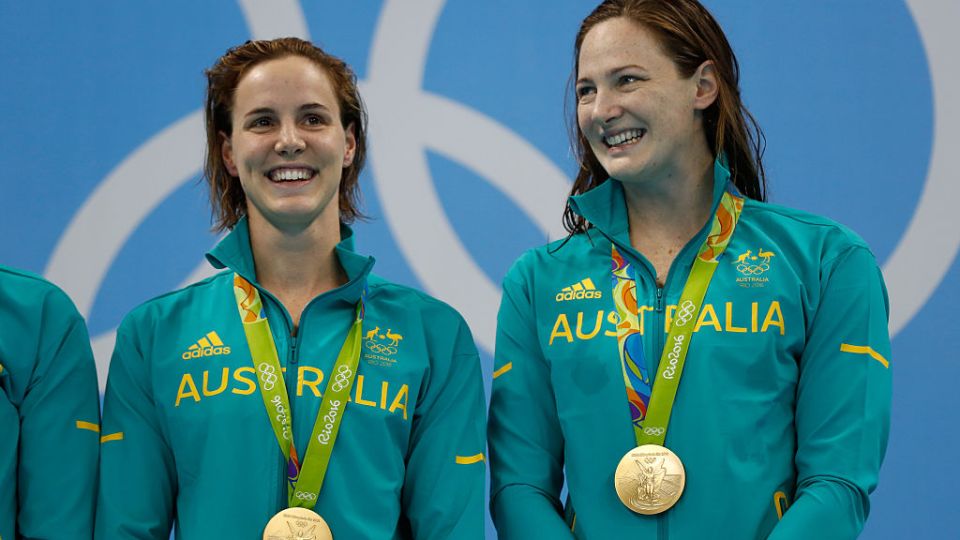 Bronte (L) and Cate are all smiles. Photo: Getty

Cate and Bronte Campbell became the first Australian sisters to win gold medals in the same event during an exciting first day of swimming at the 2016 Olympic Games in Brazil.

Inspired by Mack Horton’s earlier success in the men’s 400m freestyle, the pair helped Australia come from behind to topple the United States in the women’s 4x100m freestyle relay on Sunday in a result that sent the nation to the top of the medal tally.

They did it in a world record time, too, raising hopes of a week of Australian dominance in the pool in Rio.

For 24-year-old Cate and Bronte, 22, gold in the relay capped a 15-year dream, and delighted their family, with father Eric watching on from the stands.

Mother Jenny remained in Brisbane, though, looking after 17-year-old brother Hamish, who has cerebral palsy.

“This has been a dream for so long and it’s come true,” an ecstatic Jenny told the Seven Network.

“It almost seems unbelievable that I have two daughters who stood at the top of the podium at the [Olympics], doing what they used to talk about doing 15 years ago.

“Right from when they were very little – just nine and seven – and they started swimming, they would get up at 6.30 in the morning … and they walked up to the swimming pool.

“It was just so exciting and all four girls [in the relay team] did really, really well.”

So proud of these girls. Handled the pressure & delivered on the biggest stage in the world! #OurTeam pic.twitter.com/ApVrub0iQE

Hamish, who has the approximate development of a three-year-old, needs 24-hour care.

Bronte Campbell has previously said she often thinks about Hamish when she is behind the blocks, as a way to remind her that it’s only a race – and that there are worse things in life than losing.

Jenny said that although Hamish cannot see that well, he was delighted with the efforts of his sisters.

“He loved hearing the national anthem. He’s thrilled,” she added.

“We watched it together, but it is also my dad’s 86th birthday today … we’re celebrating everything.”

Cate and Bronte have quickly become the faces of Australia’s swimming team on the back of their lightning-fast times, warm demeanours and compelling family story.

Both were born in Malawi but moved to Australia at the ages of nine and seven respectively.

Surprisingly, older sister Cate – the hot favourite to win both the 50m and 100m freestyle event – was a self-confessed lazy “sluggard” when she was younger, letting other swimmers lap her so she would have to swim one lap less.

It was hard worker Bronte’s impressive gold medal haul at junior swim meets that eventually made Cate “snap”, steal her trophies and hide them under her bed.

“Mum eventually found them, sat me down and said: ‘Bronte worked really hard for them, Cate. If you want what Bronte has, then you’re going to have to work for it’,” she told the Herald Sun in July.

Now, the Campbell home hosts the fastest and second-fastest female swimmers in the world.

“If Africa didn’t give us enough perspective on how lucky we were, Hamish did,” Cate told the newspaper.

“He can’t do anything for himself, yet he’s the happiest kid in the world.

“You don’t really have the right to be upset about a swim race when your little brother can’t feed himself, talk or speak.”

On Sunday, Cate reflected on how special it was to hand over the final leg of the race to her younger sister.

“It was amazing, I barely had any breath left, just enough to cheer her home.”

Then it was time to celebrate.

You get the feeling the Campbell family will be doing plenty of that over the next week.