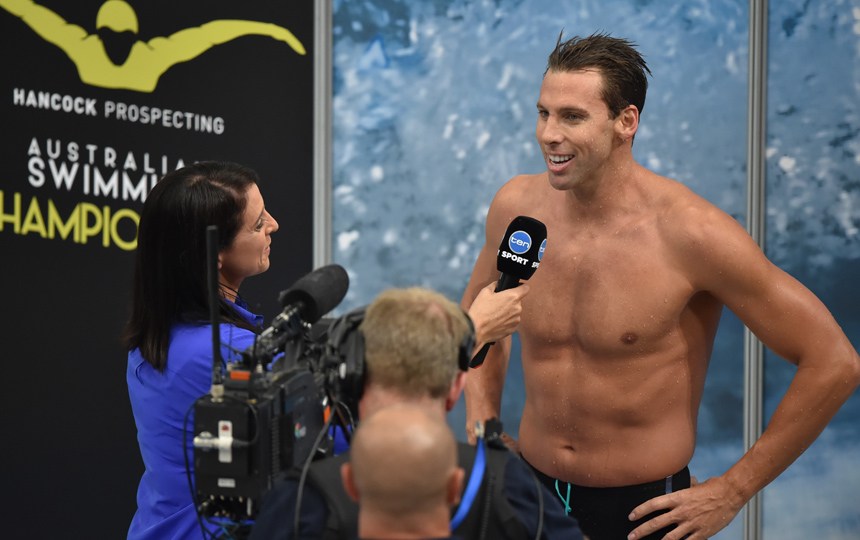 Grant Hackett has had plenty of experience behind a microphone. Photo: Getty

Grant Hackett will be commentating on the Olympics after all.

The three-time gold medallist will be doing it from Qatar, however, and not bustling Rio de Janeiro.

Hackett seemed set to cover the Games in Brazil for the Seven Network before a much-publicised in-flight incident in April where he was alleged to have groped a passenger on the chest when under the influence of alcohol.

The 36-year-old, who later said he “stuffed up” and apologised for his “pure stupidity”, revealed on Wednesday that he had approached Swimming Australia after the flight and told them he would happily stand down from his planned mentoring role at the Games if it was going to cause “a distraction”.

With Seven deciding against using Hackett as well, it left him without a role for sport’s biggest event until Middle Eastern broadcaster beIN Sports came calling.

Hackett has reportedly signed a two-week contract that will see him based 12,000 kilometres away from Brazil in the network’s Qatari studios.

“The timing doesn’t entirely work for them to have the swimming live,” Hackett told News Limited.

“It will be more previews and reviews but really it is just nice to do something connected with the Games.

“After swimming at three Games and doing commentary in London, I was worried I wouldn’t be involved but this opportunity came up and I thought ‘great’.

“It’s another interesting experience that has come my way because of sport so you have to be happy with that.”

beIN Sports broadcast into Australia, but it is unclear whether Hackett’s commentary will make it Down Under.

The network – owned by media giant Al Jazeera – does not have the rights to show the Olympics in Australia but Hackett’s appearances on its panel shows may be screened.

beIN Sports has recently expanded its sports offering in Australia and now has three sports channels on Foxtel.

It will show UEFA Champions League, UEFA Europa League, La Liga, Serie A, Bundesliga and other top football and rugby leagues this season.

Hackett, a former presenter with the Nine Network, said he was “hurt” by the media criticism that followed his appearance in the headlines earlier this year.

But he said that his new challenge was the right way to progress his career.

“I’m only human and it [media criticism] does hurt,” he added.

“My priority is to learn from my mistakes and move forward and this is a good start.

“We were laughing about it just the other day. Grant Hackett, live from Qatar … I never thought I’d have a lead-in like that.

“It’s funny where life takes you.”

Hackett burst onto the scene at the 2000 Olympic Games, winning gold medals for his country in both the 1500m freestyle and in the 4x200m freestyle relay.

He also won gold in the 1500m freestyle at the Athens Games in 2004, and only just missed out on becoming the first male swimmer ever to win three consecutive Olympic golds in the same event.

Tunisia’s Oussama Mellouli edged him by 0.69 seconds for gold in the 1500m freestyle at the 2008 Olympic Games in Beijing.

Since then, Hackett has courted controversy, with police called to his then-home in 2011 after a heated dispute with ex-wife Candice Alley left the apartment “in disarray”. The pair split up in 2013.

He also admitted he relied on sleeping pill Stilnox during the Beijing Olympics.