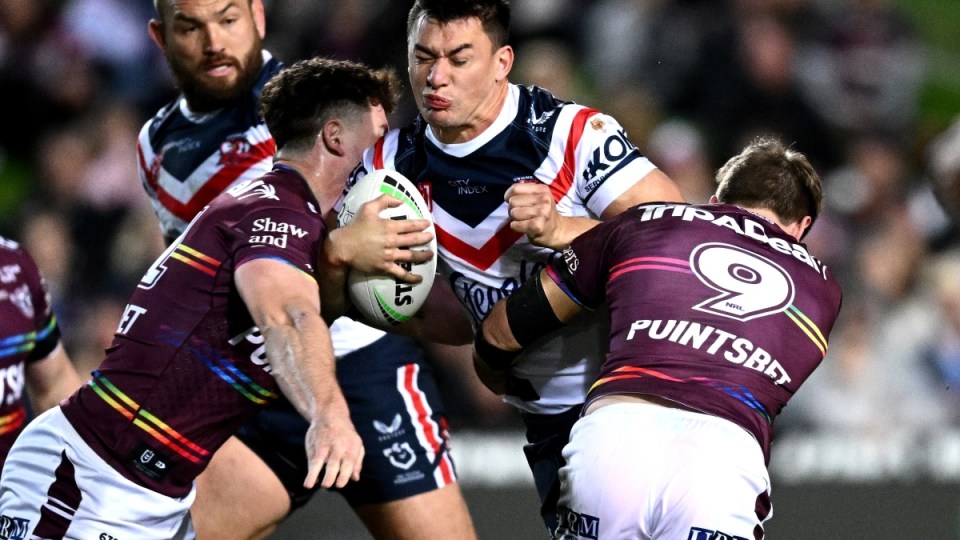 Manly has kept its pride intact but points proved the biggest issue as its makeshift NRL side was outgunned 20-10 by the Sydney Roosters.

After the most dramatic and controversial lead-up to a game this season, Manly managed to stay in the game despite seven of its players boycotting their rainbow jersey.

For all the expectations of a Roosters flogging, Trent Robinson’s men were outscored 4-2 in the second half as they went tryless against the depleted Sea Eagles following the break.

Still they did what they needed to do by controlling the match, with their biggest concern being a second concussion in 15 days for Lindsay Collins.

The two competition points were also vital, lifting them clear into the top eight as they face the hardest run home of all teams.

And they did it all against a Manly team full of passion.

The Sea Eagles gave every indication they were up for the match, pushing Joseph Suaalii over the sideline in the first set of six.

Their energy was immense, they hit hard and for no second could their zeal be questioned.

Late in the match newcomer Zac Fulton pulled off a tremendous one-on-one tackle on James Tedesco to force a line dropout under the grandstand named after his grandfather Bob.

Down 20-6 with 13 minutes to go, Manly even gave itself a chance to get back into the game but skipper Daly Cherry-Evans was denied a try on a bobbled grounding.

Cherry-Evans put himself in everything, regularly popping up to break down defensive plays while also at one stage marking a ball on the wing.

Jake Trbojevic made 34 tackles and didn’t miss one, as one of three Sea Eagles players returning straight from COVID-19 isolation.

But the Sea Eagles’ inexperience was also clear, particularly in the first half as Roosters stars Tedesco, Joey Manu and Daniel Tupou dominated.

Fiji Silktails graduate and NRL debutant Pio Seci was caught out twice on the right wing in the first 10 minutes, with Tupou scoring once on him early.

With three outside backs among its boycotters, Manly’s edge defence suffered.

Second-rower Nat Butcher scored one Roosters try when he ran onto a left-footed Tedesco grubber-kick, while another came when Manu crashed over.

Manu’s try was a cruel blow to Manly, coming after a kick off bounced back into the Roosters’ hands after Cherry-Evans had put Andrew Davey over to make it 12-6.

The result puts the Roosters two points clear of Manly in the fight for the final spot in the top eight, with a far superior for-and-against record.

By the end of the round, it’s possible the Sea Eagles could be as low as 11th on the ladder.

Ultimately, Manly’s pride remained intact. But its best shot at boosting its hopes of a top-eight finish was lost.