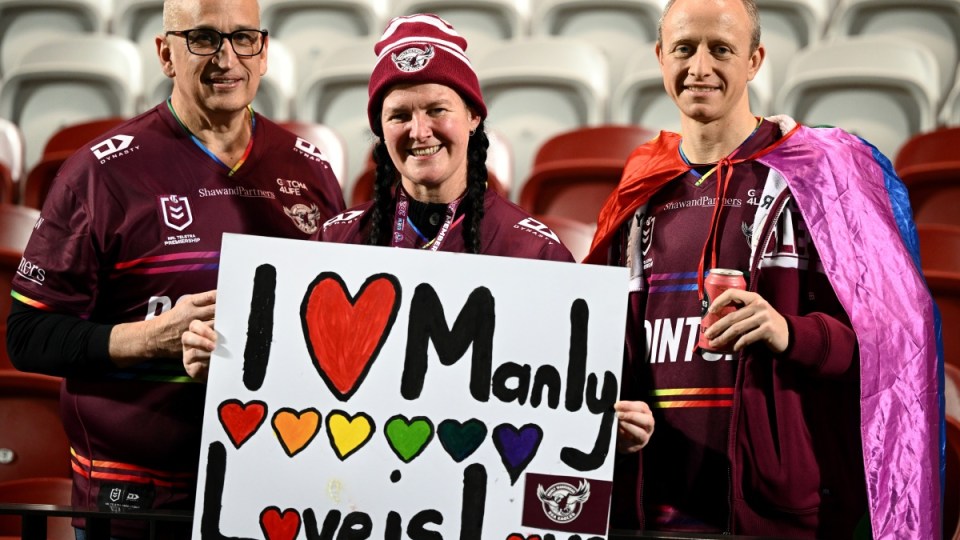 Manly fans show their support for the inclusion-themed jersey at the NRL clash against the Roosters. Photo: AAP

Controversy around seven players’ decision to sit out an NRL match rather than wear an inclusion-themed jersey did nothing to deter the Manly faithful from turning out at 4 Pines Park on Thursday night.

With their finals hopes in the balance, the Sea Eagles chose to persist with donning the Everyone In League strip, which replaces Manly’s traditional white hoops with the rainbow pattern the LGBTQIA+ community has made its own.

The preamble to the game was indistinguishable from any other Thursday night match in Brookvale, the Sea Eagles and Sydney Roosters warming up and broadcast crews capturing the scene.

But the differences were to be seen in the average-sized crowd of 12,187, where passionate Manly fans showed their pride.

Manly’s merchandise store inside the stadium sold out of men’s sizes of the Everyone In League jersey within 20 minutes of opening, and women’s sizes in 30 minutes.

Employee Kayla said it was the first time she could remember a jersey selling out on game day.

“We usually only ever sell out of things on cold nights, like scarves and beanies.”

Manly boss Scott Penn said on Thursday that he wants to speak with the NRL about introducing an inclusion round next season, confident all of his players would participate after a year of dialogue.

The Sea Eagles owner flew back into Sydney from the US, before meeting with the seven Manly players who boycotted the evening’s 20-10 loss to the Sydney Roosters.

Top of Penn’s priorities is to ensure the Sea Eagles are unified with all players back to face Parramatta next week and the finals still a real possibility.

Owner makes no apologies for jersey

The Manly chair also issued a statement to the club’s fans, stating a review would be held into why all staff and players were not aware of the club’s rainbow jersey before it was released publicly.

But he makes no apologies for the jersey, stressing Manly wanted it to promote inclusivity for all, be it with race, religion, gender, disability or sexual orientation.

“We will take some learnings out of this but the most important thing is we will be bigger and stronger next year,” Penn said.

“We would like that to be with a game-wide initiative. We will be working with the NRL, obviously discussing how we can do it better.

“And then how we can do it better as a game.”

Manly’s Seabirds cheerleaders mingled with fans on entry wearing rainbow patterns in their outfits, while some punters took their seats, rainbow flags and signs in hand.

Others wore rainbow Amnesty International badges, which were handed out by a group of committed fans just outside the stadium.

Long-time Sea Eagles fan Mark said the week of headlines motivated him to go out and buy the inclusion-themed jersey, which sold out online in the lead-up to game day.

“Dessie (coach Des Hasler) and DCE (captain Daly Cherry-Evans) at the press conference, they handled it really well and I thought I should show some support for them,” he said.

“We’re all in this stadium together, we share it together and we breathe the same air.

“I wanted to get the Pride jersey,” Ava said. “We support the cause. I was pretty chuffed to hear we were the first to do it. Now’s the time.”

Sea Eagles supporter Belinda hadn’t been to a game in over 10 years by her own estimation but came along with her daughter Zoe.

Maafu Palu, pastor at a Tongan church in Sydney’s west, came to the game in a group supporting the seven players who chose not to wear the jerseys on religious grounds.

“We trust very much in the Bible as the word of God, so when I hear about these guys making a stand, I can understand,” Palu said.

“I’m happy for those who are supportive of the LGBTQIA+ community. In Tonga, we live with a very good relationship with people of all kinds.

“These rainbow colours stand for diversity but it should include everyone, not just everyone except Christians.”

During the week, openly gay NRL great Ian Roberts said he would be open to meeting the players who sat out to discuss the significance of a pride round.

“Knowing Pacific Islanders, I’m sure they’d be open to talking to anybody about this sort of thing,” Palu said.

Michael Pascoe: The Liberals face being engulfed by a rising tide of independents
Replenished Brisbane Broncos too good for Parramatta Eels
Today's Stories