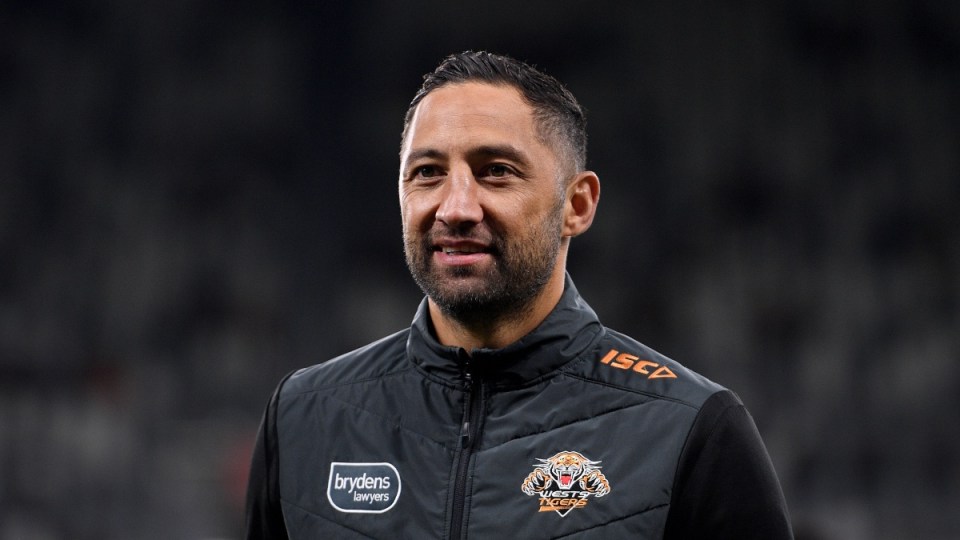 Wests Tigers have confirmed club legend Benji Marshall will become head coach from 2025 after Tim Sheens, reappointed to the role on Thursday, steps down.

Sheens is the only premiership-winning coach in the joint venture’s history and next season will resume the role from which he was sacked in 2012.

His reappointment comes after a week of speculation that he would transition from his job as the club’s general manager of football and into the coaching hot seat, currently occupied by Brett Kimmorley on an interim basis.

Marshall and Robbie Farah, who played under Sheens in the Tigers’ 2005 premiership victory, will serve as assistant coaches for two years from 2023.

Marshall played 257 games for the Tigers during two separate stints and only retired last year after spending the 2021 campaign with South Sydney.

Farah, meanwhile, has worked as a trainer at the Tigers in his retirement and holds the record for most games played at the joint venture.

“This is a very clear path forward for this club and we are delighted to have Tim, Benji and Robbie reunited for the next phase of our club’s growth,” CEO Justin Pascoe said.

“Benji and Robbie are two of the most talented players this club has seen, and Tim’s coaching record speaks for itself.

Tigers half Adam Doueihi said having past players such as Marshall and Farah back at the club was just what was needed.

“Both have played at the pinnacle of the game and are Tigers die-hards, they both love the club,” he told reporters.

“If we can get them mentoring off people like Benji and Robbie, it’ll only do the club good.”

Fellow Tiger Jackson Hastings agreed, adding Sheens would be a great option to restore pride in the jumper.

“He knows the DNA of the club better than anyone, the fabric of the joint,” he told reporters.

“It’d be great for us boys who haven’t been here that long or kids coming through, to have someone to aspire to and look up to, who has that Tigers DNA and has built that over a number of years.

“He’s proven that he can take a club to the pinnacle and that’s what we all want to do as players.”

Marshall, who has been working as an analyst this season, recently told Fox Sports an NRL head coaching role would be his “dream job”.

“To be able to be mentored by someone like Tim Sheens and learn underneath him with a chance to get there … if that’s the route they want to go down with me, that is something I would be interested to explore,” he said.

“The dream for me would be to be an NRL coach and at the Wests Tigers would be an ideal situation.

“I love my job that I do now, but that is an opportunity that I might never get again, the opportunity to try and become a head coach.”