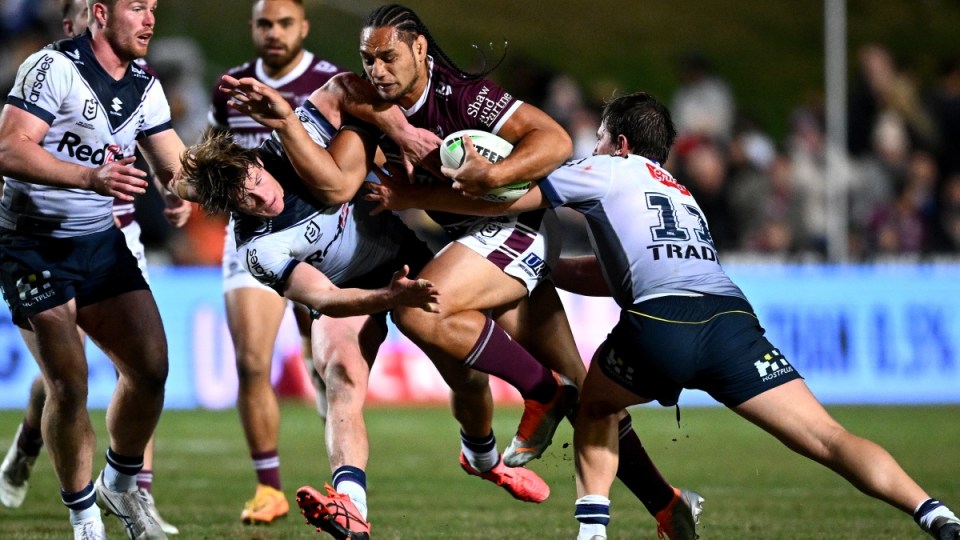 Manly has ended its hunt for a win over one of the NRL’s top eight in impressive fashion, brushing Melbourne aside to record a 36-30 win on Thursday night.

Des Hasler’s side had lost its previous seven games against teams sitting in the finals spots but obliterated an out-of-sorts Melbourne in front of 8618 spectators at Brookvale Oval.

Melbourne was without talismanic five-eighth Cameron Munster due to a shoulder injury but at times it looked like coach Craig Bellamy was missing his entire starting side.

The Storm played too laterally, made basic errors and struggled to punch a hole through the Manly middle.

They scored four tries in the last 10 minutes but by then Manly, who moved into the top eight with the victory, had taken their foot off the gas.

Even the return of Ryan Papenhuyzen at fullback couldn’t spark the Storm for most of the match, with Penrith likely to benefit from Melbourne’s slip-up in the race for the minor premiership.

Papenhuyzen had been sidelined with COVID-19 and a knee injury since round nine and only really came to the fore when the game was dead.

He started his return shakily by gifting Manly its first try when his grubber kick found the arms of Tolatau Koula, who raced 90 metres to score after eight minutes.

Papenhuyzen made amends by setting up Nick Meaney for the Storm’s opener but the fullback showed signs of ring rust when he was caught out of position by Daly Cherry-Evans.

The Manly skipper dispatched a 40/20 on third tackle with Papenhuyzen way off the pace and on the ensuing set Jason Saab raced over on the opposing flank.

There was also a mix-up between Papenhuyzen and Meaney on a Cherry-Evans bomb and the ball bounced kindly for Manly winger Christian Tuipulotu to dot down.

Saab added a second on the stroke of half-time to give Manly an 18-6 lead.

Bellamy is famous for reading the riot act but his half-time pep talk seemed to have little effect.

Two handling errors in the first 10 minutes after the break led to Manly centre Morgan Harper crashing over on the left before a 100-metre set ended in teammate Haumole Olakau’atu scoring his eighth try of the season on the other side.

Brandon Smith got one back for Melbourne in his 100th NRL game but his work was quickly cancelled out by a second try to Koula.

Cherry-Evans added a penalty goal to take time off the clock and make it 36-12 with 15 minutes to play.

Melbourne scored a quartet of tries through Nelson Asofa-Solomona, Justin Olam and a Papenhuyzen double but the damage had been done long before then.