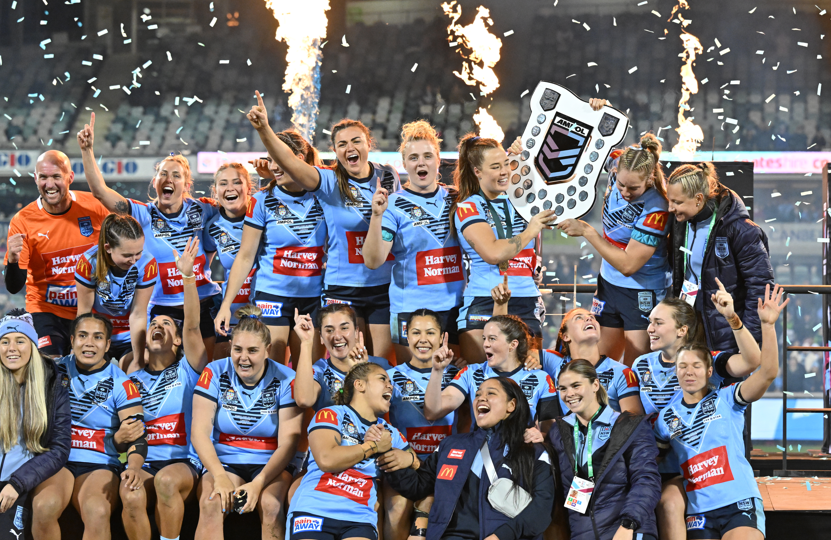 NSW women erupt in a delirium of delight after winning the series.

Minutes after Queensland captain Ali Brigginshaw hit the post with a conversion attempt that would have tied the scores with 12 minutes to play on Friday, Kelly capped a stunning 192m, 10-tackle bust display with the sealing try.

In front of a Women’s Origin record 11,321 fans at Canberra’s GIO Stadium, the Blues put two years of heartbreak behind them, grabbing an overall 3-2 lead in series victories since the Origin clashes officially began in 2018.

In a rollercoaster finish, Queensland looked to have scored to steal the win with four minutes to play, but NSW fans were sent into raptures as the try was denied by the bunker, with winger Julia Robinson judged offside on the proceeding kick.

Fresh from a Gatorade drenching to celebrate the feat, NSW coach Kylie Hilder spoke of the pride she had for her victorious side.

“This team won’t be the same moving forward, it never is, your Origin sides always change,” she told reporters.

“So on occasions where we’ve just won, we’re going to make sure that we really celebrate this win because come 2023 this same group of people won’t be the same.

“We’ve been building towards this for two years, we’ve spent the year putting this team together and we’re really close.

“The bond we have as a team, not just on the field but off it as well, and I think that showed out on the field.”

They’d jumped to a 12-4 win courtesy of first-half tries for Emma Tonegato and Kirra Dib, while four goals from halfback Rachael Pearson meant they always kept their noses in front.

Origin games are often won in the middle and this clash was no different, with emphatic displays from NSW props Simaima Taufa (125m and 32 tackles) and Millie Boyle (118m and 28 tackles) to go with Kelly’s brilliance.

‘It was a tough one’

Queensland led early through lock Destiny Brill as she crashed over on eight minutes, but they struggled at times to contain the dynamic NSW attack hell-bent on reclaiming the shield.

Tarryn Aiken and Brigginshaw controlled things via the boot with 301 kicking metres, but discipline got the Maroons in the end with Pearson’s penalty goals always keeping the Blues’ nose in front.

The disallowed try that could have won the shield was a brutal blow for Queensland coach Tahnee Norris.

“It was a tough one, I’m still feeling at the moment obviously and will for a while,” she told reporters.

“We just couldn’t capitalise on a couple of opportunities there and the girls fought right to the end. … it was a roller coaster and disappointing to come away with a loss.

“To see the girls put in so much effort (and lose) really, really hurt.”

NSW women claim State of Origin crown in a thriller