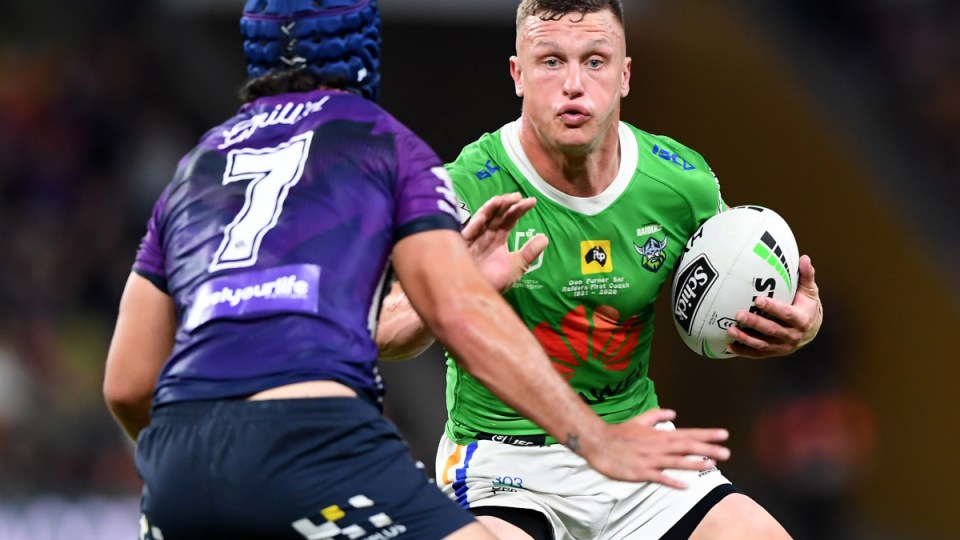 Jack Wighton of the Raiders will be watching the big game from home in COVID isolation. Photo: AAP

NSW have been dealt a massive blow ahead of the second State of Origin with barnstorming centre Jack Wighton set to be ruled out of their must-win clash with COVID-19.

The Canberra playmaker will miss the Raiders’ clash with Newcastle on Sunday after contracting the virus, which requires him to spend seven days in isolation.

“Raiders five-eighth Jack Wighton has been ruled out of Sunday’s match against the Knights due to COVID protocols,” the club announced late on Friday.

“Wighton will follow COVID return-to-play protocols once his isolation is completed next week.”

Gap in the line-up

Coach Brad Fittler is set to name his Blues line-up on Sunday with NSW needing victory in Perth next Sunday after Queensland clinched the series opener in Sydney.

Wighton was a certainty as the stand-out in their shock 16-10 loss.

They are set to depart Sydney for Perth on Monday to begin preparations and Wighton could possibly join the squad late in the week, however it would be a massive gamble if he would be up to playing Origin.

Wighton was shifted from his usual five-eighth role into the centres to cover the loss of injured stars Latrell Mitchell and Tom Trbojevic.

Mitchell has recovered from his hamstring injury but is yet to play a NRL game.

Penrith’s Stephen Crichton is Wighton’s likely replacement in the starting side.

‘More relevant than ever’: Why The Wiggles make cover of iconic pop culture magazine Rolling Stone
Julian Assange’s extradition to the US approved by UK cabinet minister
Today's Stories