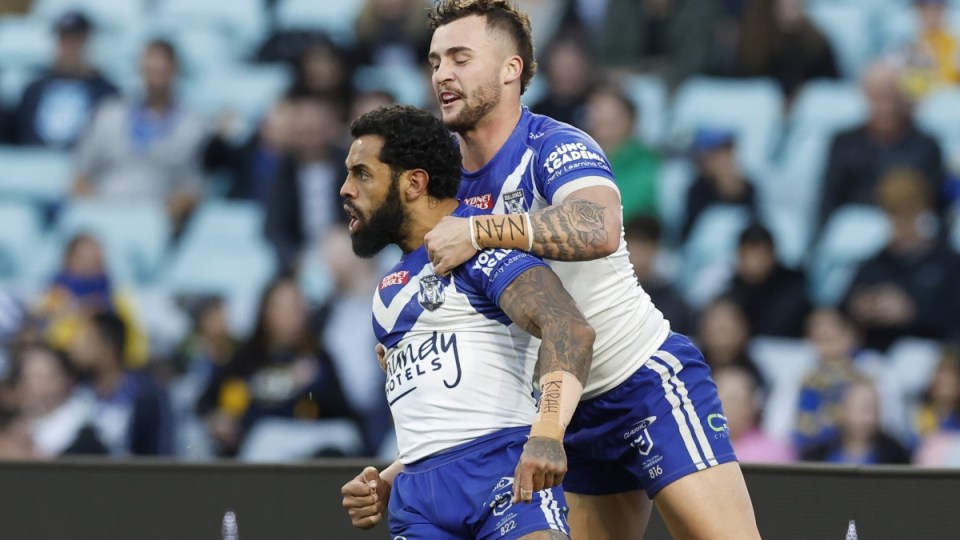 Winger Josh Addo-Carr says he will not let NSW down if picked for a State of Origin recall after scoring a hat-trick to help Canterbury stun Parramatta 34-4.

In the biggest boilover of the NRL season, the Bulldogs dominated their arch-rivals with their best performance in almost four years.

Matt Burton was superb as he begins to flourish at his new club, while his combination with Addo-Carr suddenly looms as one of the most potent in the NRL.

But the story of the day was Addo-Carr, whose first hat-trick came two weeks out from Origin II in Perth.

Controversially dropped for the Origin series opener, Addo-Carr has now scored five tries in the two matches since his NSW axing became official.

His replacement Daniel Tupou’s status for Game II also remains up in the air.

Doubts surround Tupou playing for NSW because he could make himself available for Tonga in the Pacific Test to be held 24 hours before the Origin game.

Tupou had initially been picked in the series opener for his height, but his high-leaping opposite number Xavier Coates was injured in Queensland’s win and won’t play in Perth.

All of that could lead to Addo-Carr’s recall, with the former Melbourne flyer doing everything to help his cause on Sunday.

He had Canterbury’s first try when Burton hit him on the chest with a perfect cross-field kick early in the set in the eighth minute, allowing him to score untouched.

Addo-Carr’s speed and acceleration was also crucial in his next try, charging down a Burton grubber kick early in the second half.

And his third try put the icing on the cake for the Bulldogs, collecting a Clint Gutherson pass and intercepting it to go 50 metres to score.

“I will always do the state proud if I am selected. But if not I will be supporting them all the way,” Addo-Carr told ABC radio.

Burton was also in everything in just the Bulldogs’ third win of the season.

His afternoon was best summed up by a one-minute passage of play late in the game when he knocked the ball out of Mitch Moses’ hands as the Eels halfback was about to score under the posts.

From the ensuing set, Burton produced a perfect on-the-run grubber kick for Jake Averillo to score.

The try was Averillo’s second, after he also pulled off an 80-metre intercept in the first half just before Jacob Kiraz also went 50 metres after running on to a Kyle Flanagan pass.

“That’s probably the best win we have had in two or three years,” captain Josh Jackson said.

“They’re a really quality side and they’ll be there in September. So that’s a great win for our club and everyone involved.”

For all of Canterbury’s brilliance, this was easily the worst performance of Parramatta’s season.

The Eels failed to put any kick pressure on Burton and were sloppy across the 80 minutes, as they slipped a win behind in the race for the top four.

“We didn’t come with any hunger, any want or any desire,” coach Brad Arthur said.

“Credit to the opposition. They wanted it more than us today. They were desperate. It was embarrassing.”