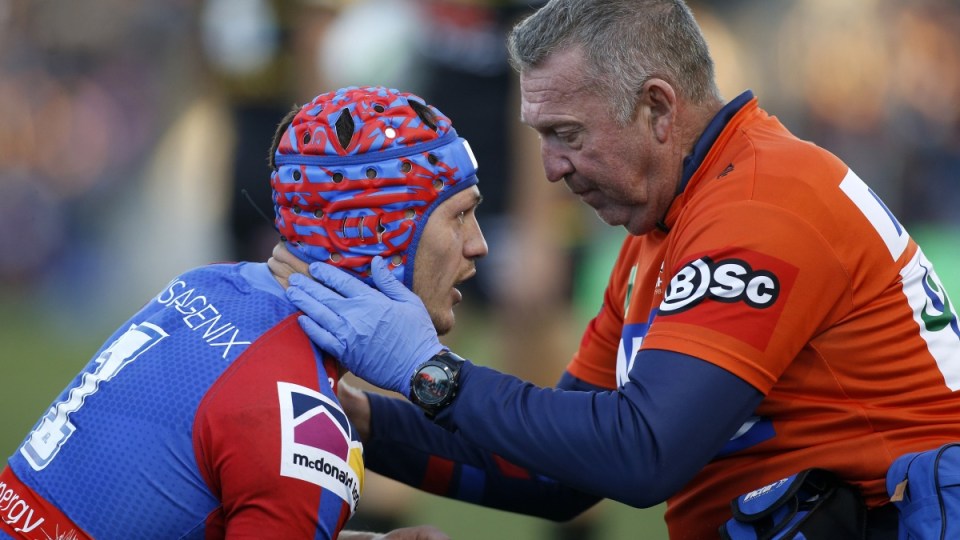 Nathan Cleary rebounded from NSW’s State of Origin defeat by guiding  Penrith to a 42-6 win over a Newcastle side deprived of Kalyn Ponga on Sunday.

In front of 21,332 fans at McDonald Jones Stadium, Ponga was trampled by Viliame Kikau when the Penrith forward barged over for a try in the 13th minute.

Ponga went off for a head injury assessment and did not return to the field after laying prone.

Given the Knights don’t play until Canberra away next Sunday, the fullback should be able to play another match before Queensland’s Origin II team announcement the following week.

“It was a ripple effect for us,” Knights coach Adam O’Brien said of Ponga’s exit.

“I’ve just spoken to him and he’s fine. He’ll do the protocols but I would’ve given him a rest for the next few days anyway.”

Even in the period their star man was on the field, the Knights were largely ineffective due to the brilliance of Cleary and halves partner Jarome Luai.

The Penrith duo had an uncharacteristically poor showing in Origin I but both responded perfectly.

Without lock Isaah Yeo (rested) and Cleary’s father and head coach Ivan – due to an ongoing knee problem – the Panthers were faultless, exemplified by the fact they finished the first half with a 100 per cent completion rate.

“I knew he (Nathan) was going to come out and get man of the match,” Panthers assistant coach Cameron Ciraldo said.

“It was pretty unfair some of criticism he copped on Wednesday but we wouldn’t swap him for anyone.

“The (Origin) boys were smiling and had a really good energy about them and they were really focused to come up here and get a result.”

Cleary scored Penrith’s opener with Kikau, Taylan May and Brian To’o all crossing before halftime, with their halfback adding a penalty to give the visitors a 26-0 lead.

Centre Izack Tago continued Penrith’s hot run when he dived on a Kikau grubberkick just after halftime, with To’o notching another to his tally.

Stephen Crichton also crossed for a try after making his Origin debut midweek.

Cleary kicked six of seven conversions to help reinstate Penrith’s four-point gap at the top of the NRL ladder.

The loss continued a poor run of form for the Knights which has brought just two wins from their last 11 games under O’Brien.

Newcastle hasn’t won its past five games at home and has conceded 197 points in that time.

“The reality of where we need to get, it’s going to take some time,” O’Brien said.

“It’s not a quick fix and there’s some stuff that has been ingrained in this club for decades that we need to get on top of. Progress is rarely in a straight line.”

In other NRL games on Sunday, the Warriors fumbled another early lead in a 38-16 loss to Cronulla as life under Stacey Jones began the way it ended under former coach Nathan Brown, who was sacked mid-week.

The other club to dispose of its senior coach last week, Wests Tigers, suffered the ignominy of a 30-4 loss to Manly and had Brent Naden sent off after an ugly tackle.