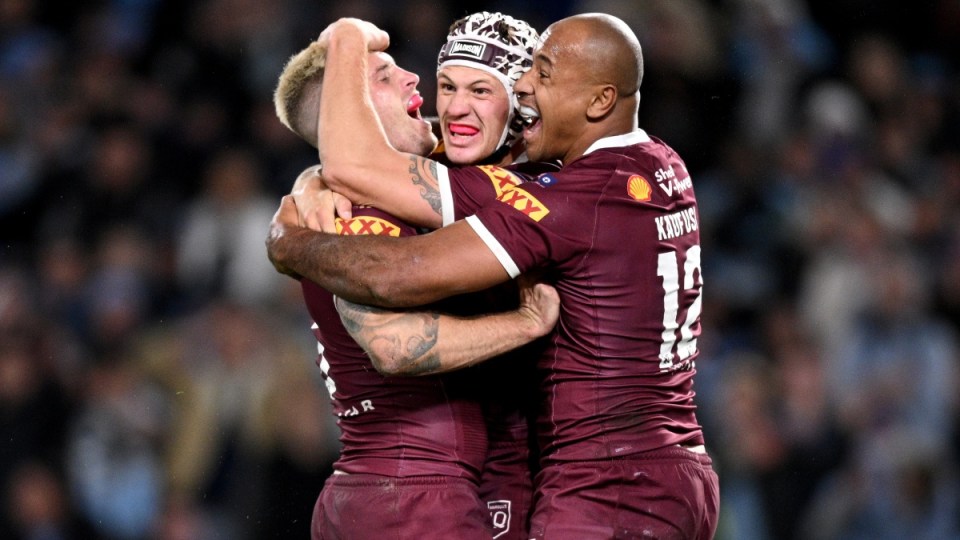 Cameron Munster has inspired Queensland as it pulled off a massive State of Origin upset, shocking NSW 16-10 in the series opener at Accor Stadium.

Five eighth Munster was at his brilliant best for the Maroons, who recovered from losing winger Xavier Coates to injury early in Wednesday night’s clash.

With four debutants in its side, Queensland took a 16-4 lead midway through the second half before holding out the fast-finishing Blues late.

It marked its first win in Sydney since 2017, when Johnathan Thurston nailed a last-minute conversion in his last series beside Cameron Smith and Billy Slater.

And while those three sat on Queensland’s coaching staff on Wednesday night, this was a win befitting the new era of Maroons under head coach Slater.

Rookie Pat Carrigan swung the momentum of the match off the bench, while Daly Cherry-Evans and Munster both played direct in attack.

Kalyn Ponga also had one of his best nights in Origin at fullback, as the Maroons beat NSW with their ball movement in the middle.

In contrast the Blues were frantic, desperately chasing points in the second half after they fell behind just before halftime.

Brad Fittler’s men scored first through Jack Wighton when Nathan Cleary and Jarome Luai put him over, but they were forced to wait almost 60 minutes for their next points.

In between, Queensland took control of the game in front of the biggest crowd in Sydney since the start of the pandemic with 80,512 in attendance.

Ponga had a role in the Maroons’ first try, when a pass of his went to ground but debutant winger Selwyn Cobbo scooped the ball up and grubber-kicked back inside for Dane Gagai to go over.

Munster and Cherry-Evans were then influential in the next try.

Munster put Queensland on the attack when he burst down field, before Cherry-Evans went over with ease from an ensuing scrum.

Ponga put on arguably the ball of the match to make it 16-4 with 25 minutes to play, cutting out one man to put Valentine Holmes over untouched on the left wing.

Then it was time for Munster to stand up in defence.

NSW got back within six points when Jarome Luai put Cameron Murray over, but otherwise the Blues were unable to take their chances.

He also popped up at a crucial moment in the Blues’ penultimate set, latching onto a Luai grubber as it bounced towards the line.

Controversy is likely to follow the independent doctor’s decision to allow Isaah Yeo to play on after head contact in the first tackle.

The Penrith lock appeared to stagger back after the hit on Papalii, but he was assessed on field and allowed to stay on.