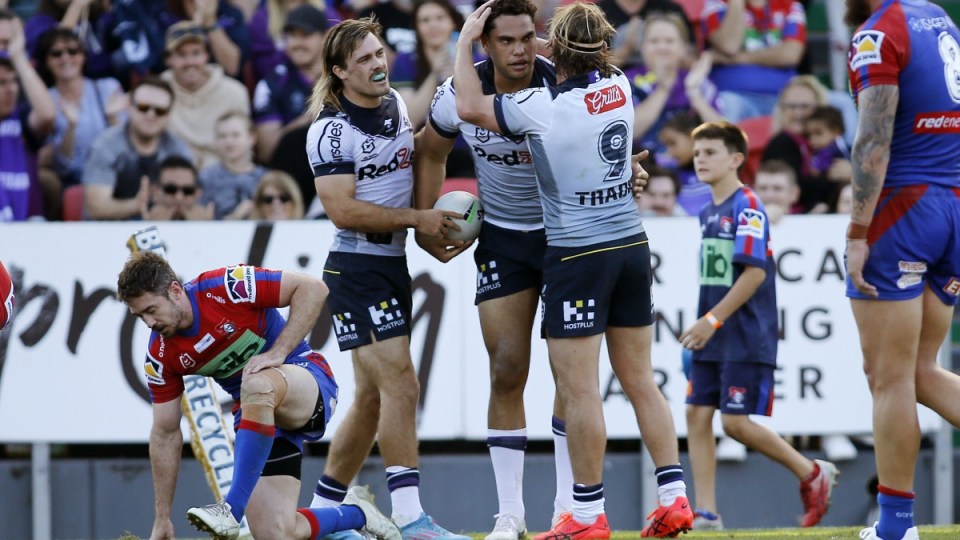 Newcastle has hit its lowest ebb in five years as Melbourne consigned coach Adam O’Brien’s men to last spot on the NRL ladder with a 50-2 flogging.

On another sorry afternoon for the Knights, halfback Jake Clifford was hooked after 53 minutes as they slumped to their worst loss in O’Brien’s tenure.

Apologetic after being hammered by Parramatta at home last week, the Knights barely stood a chance against a rampant Storm who have scored 120 points in their past two games.

While the Warriors on Saturday rebounded from their 70-10 mauling at the hands of Melbourne last week, there was no such turnaround for the Knights at McDonald Jones Stadium.

The hosts failed to break Melbourne’s, as they collapsed to a sixth straight loss and fell to 16th for the first time since Nathan Brown’s days at the club in 2017.

Clifford puts kick-off out on the full

It all went wrong from the start, after Clifford put the kick-off out on the full and the Knights found themselves down 10-0 by the time they first played the ball in the 12th minute.

Newcastle also watched the kick-off to the second half go dead to hand over possession and another try, while their only points came via a penalty goal on the stroke of halftime.

Post-match, O’Brien could only indicate his bemusement at the on-field decision to go for two points while down 26-0.

While he pointed at the significant injury toll as one of the key issues facing the club, captain Kalyn Ponga admitted the past fortnight was the toughest he had endured since arriving in 2017.

“I think there was a lot more effort than last week and that hurts more,” Ponga said.

“We just have some areas and last plays that just weren’t good enough, especially against the Storm.”

In total, Newcastle completed just 15 sets and made 13 errors, chalking up 32 missed tackles in defence.

Five-eighth Adam Clune continued to battle a knee injury and struggled to kick, while Clifford made a return late, when Tex Hoy required a HIA, but failed to add any life.

“Like the rest of the team Jake is lacking a bit of confidence out there,” O’Brien said.

“Leaving him out there against them, the way they are playing, wasn’t going to help him.

“Now it’s important I coach him and get him through.

“He’s like a lot of people here wearing the expectation. You get the win-loss anxiety instead of performance anxiety.”

In comparison, Melbourne is flying.

Xavier Coates had another field day on the right wing with his hat-trick making it seven tries in two games, while Harry Grant set up three tries out of dummy-half.

Cameron Munster had a hand in two tries and scored one himself, as the Storm again made light work of the Knights’ flimsy right-edge defence with Justin Olam claiming a double.

“The way we completed and still played our footy, that’s the reason it was what it was,” coach Craig Bellamy said.

A near full house of fans in Wollongong had to wait 57 minutes before seeing a try. But solo efforts from Ben Hunt and lively dummy-half Jayden Sullivan were enough to secure the Dragons the two competition points.