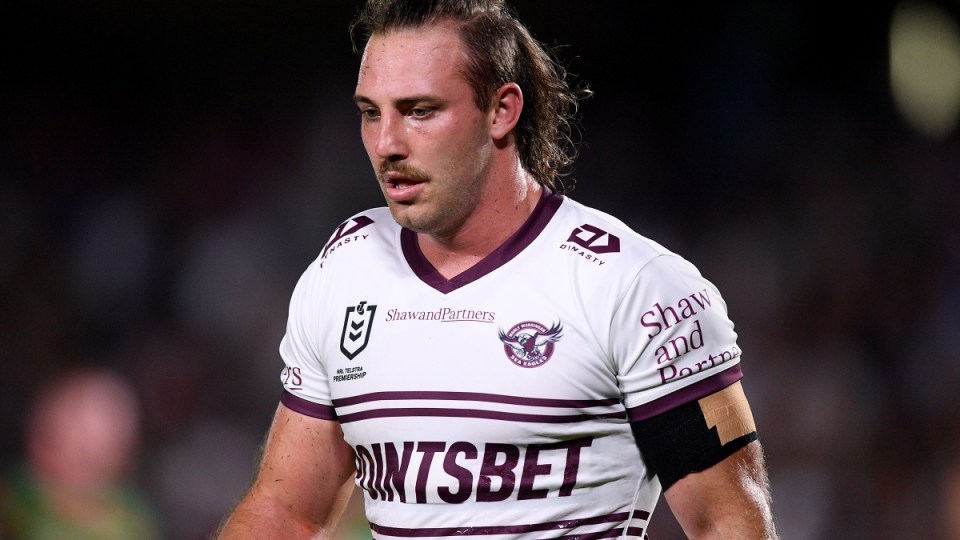 Manly's Karl Lawton was sent off for an dangerous tackle in their NRL defeat to South Sydney in Gosford on Friday night. Photo: AAP

Manly’s Karl Lawton has become just the second player sent off for a dangerous throw since the Super League war, before South Sydney toppled the Sea Eagles 40-22 in Gosford on Friday night.

On a disastrous night for the Sea Eagles, second-rower Lawton was marched after just eight minutes when a tackle on Rabbitohs captain Cameron Murray went wrong.

Defending his own line, Lawton wrapped his arms around the waist of the Souths lock, only for momentum to send Murray hurtling head first into the turf.

There was no hand between the legs, but it took referee Grant Atkins and the bunker around just a minute to send him from the field.

“You have one man running real hard at the other man, he gets down low.

“To be sent off for that, when there is absolutely no injury to the other player, that’s extraordinary.

In doing so, Lawton joined Canberra star Nick Cotric in becoming the only players to be dismissed for a dangerous throw during the NRL era.

But despite spending 72 minutes with just 12 men, and losing Brad Parker to injury, Manly somehow stayed in the fight and threatened to become the first team since the Sea Eagles did it in 2008 to win while down a man from the first half.

They shot out to a 10-2 lead in the 13 minutes after Lawton was sent from the field, and also refused to go away when trailing 30-16 early in the second half.

Daly Cherry-Evans in particular kicked brilliantly to keep the Sea Eagles in it, while Josh Schuster was back to his dangerous best in his first game back from an ankle injury.

Kieran Foran also scored a try and set up another as he and Reuben Garrick battled injuries as Manly hung in the match.

But ultimately fatigue told, the Sea Eagles defence buckled, and the likes of Cody Walker were too dominant.

Playing in his 150th game, Walker bagged one try himself when rookie Isaiah Tass got a ball out the back for him after halftime.

The pair had earlier also combined for a try just on the halftime siren, while Alex Johnston also claimed one on the dangerous left edge when he double-stepped opposite number Jason Saab.

Tom Burgess and Murray also crossed for second-half tries through Manly’s tired middle, while Blake Taaffe crossed for his first of the year on the siren to put the Rabbitohs in the top eight.

In last night’s other NRL clash, Penrith extended its unbeaten season start with an 18-4 win over a dogged Gold Coast outfit at Cbus Super Stadium.

The defending premier looked rattled at times but held on to notch an eighth straight win in 2022 after Nathan Cleary inspired a second-half revival.