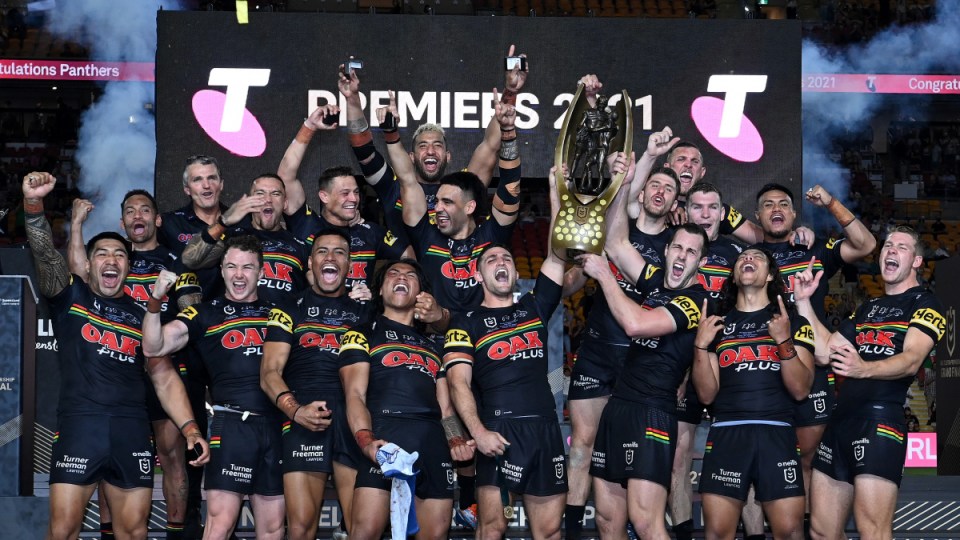 The NRL has asked Penrith for a “please explain” after images emerged of the grand final-winning team partying with a badly broken premiership trophy.

Photos on social media show Penrith players with the broken Provan-Summons trophy, with the gladiators sculpture away from its base.

In one of the images, Norm Provan and Arthur Summons can be seen in what appears to be a pram with the caption “googoo gaga” on the image.

The situation is understood to have upset NRL chief executive Andrew Abdo, particularly given the status the trophy image has in the game.

It’s believed the Panthers will point out that the trophy has taken more of a battering in the past, with breaks common in trophies across many sporting leagues.

But the images that have been spread since is what has earned the ire of head office.

An NRL spokesman has confirmed that the league has asked the Panthers for an explanation.

It’s also possible that the club could be sanctioned, as well as being charged for the cost of repairing the treasured trophy.

The social media images were the latest to be shared from Panthers players this week.

Utility Tyrone May drew criticism from some quarters after a post in which he showed himself out the front of court next to Ivan Cleary.

The image is from May’s court case in 2019, where he pleased guilty to four counts of intentionally recording an intimate image without consent.

May quoted lyrics from a Drake song in the now-deleted post, which raised eyebrows across the NRL.

“And the dirt that they threw on my name turned to soil and I grew up out it. Time for y’all to figure out what y’all gon’ do about it,” May posted.

The post drew support from several Panthers players in the comments.