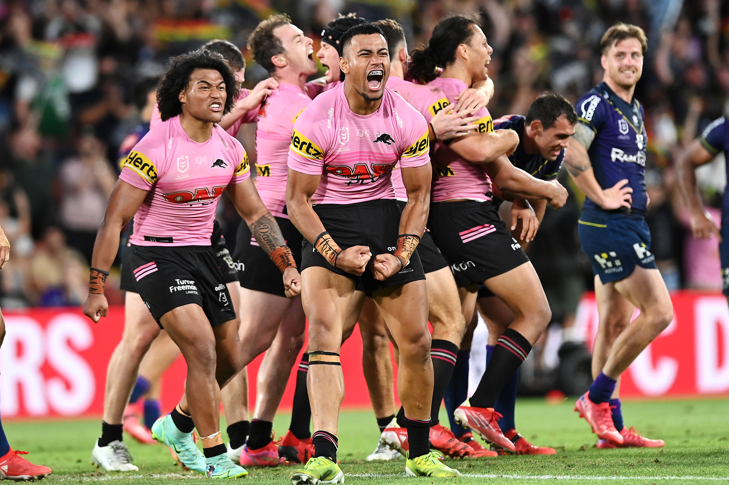 Brian To'o and Stephen Crichton of the Panthers howl in triumph after booting Melbourne from the NRL finals. Photo: Getty

Melbourne were dogged, courageous contributors to the best game of the NRL season so far against Penrith.

They did it with just 15 men for 65 minutes, soldiering on without two of their best forwards in Christian Welch and Brandon Smith after head knocks.

So gutsy, they were still in their preliminary final 10 seconds after the final siren, when a kick found Panthers’ hands and the game ended at 10-6 in Penrith’s favour.

The Storm achieved so much more than anyone could have thought possible in their first year without any of their now-retired big three.

They equalled Eastern Suburbs’ record of 19 straight wins, and accumulated the greatest for-and-against in the history of the game.

But at the end of the day, the question will still be whether this will be considered a wasted season for the defending champions and minor premiers, having enjoyed the advantage of being well rested for the preliminary final against a team that got there the hard way.

The last team to drop only three games in a regular season and not make the grand final was Canterbury in 2002.

And that only came when they were stripped of all their points late in the year, handing them the wooden spoon. Before that, and it’s some 26 years ago, it was Canberra’s 1995 side.

In fairness, the same fate would have been met by Penrith on Saturday had they lost, after also going 21-3 through the regular season.

But as good as the Panthers were in defence and as tough as the Storm did it, they were still their own worst enemies at Suncorp Stadium.

George Jennings put down a Nathan Cleary bomb in the lead up to Penrith’s first try, handing them a 6-0 lead.

Penrith’s second came after Justin Olam put a ball down. That made it 10-0.

Three times the Storm dropped the ball on the attack, as their 15 errors made for their most since round 12.

It stunted their attack, as a side that averaged a whopping 34 points per game this year could manage just six in their biggest match of the season as fatigue took its toll.

And ultimately, it ended their season one game short of where they and most others would have expected and two wins shy of where their regular-season record suggested they should finish.