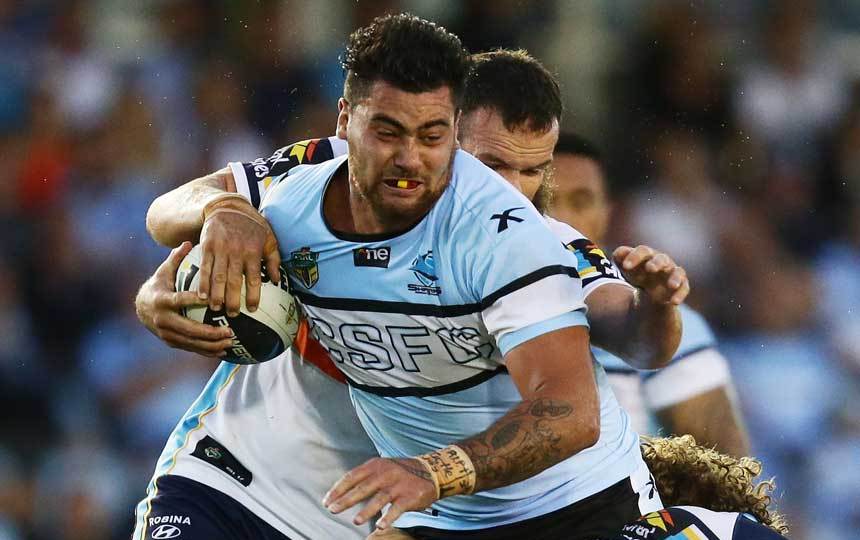 Fifita had trouble breathing and swallowing after being injured in Cronulla's loss to Newcastle. Photo: Getty

Andrew Fifita has been placed in an induced coma in a Brisbane hospital intensive care unit after suffering a laryngeal fracture on Sunday.

The Cronulla forward is in a stable condition after being rushed to hospital shortly after the Sharks’ 16-14 NRL loss to Newcastle in Redcliffe.

The 2016 premiership hero has severe swelling of the larynx which is affecting his breathing, prompting doctors to sedate him.

Fifita is due to have surgery on Tuesday.

“He is receiving the best possible care and all going well, it is expected he will recover in hospital for an extended period,” a Cronulla statement said.

Fifita, who has played just six NRL games this season, copped a blow to the throat early in the second half the round 22 loss.

He had trouble breathing and swallowing while his voice was also affected.

About 20 minutes after the game ended, a distressed Fifita was brought out of the dressing sheds and onto the field where he was examined by paramedics before being taken to hospital by ambulance.

Fifita has the support of his wife Nikki in hospital.

The 32-year-old played just 13 minutes of the game, coming off in the 39th minute for a head injury assessment after colliding with Kurt Mann’s shoulder while taking a hit-up.

He was cleared of a concussion in the sheds at halftime, but was taken off the field again in the 46th minute and did not return to the game.

A collision with Newcastle’s Tyson Frizell shortly before Fifita left the field may have caused the injury.

While running the ball, the Knights second-rower put his palm out to fend off Fifita, contacting him in the neck.

However, the Sharks remain unsure of how the injury happened.
Former Australia, Tonga and NSW prop Fifita is signed with Cronulla until the end of 2022.