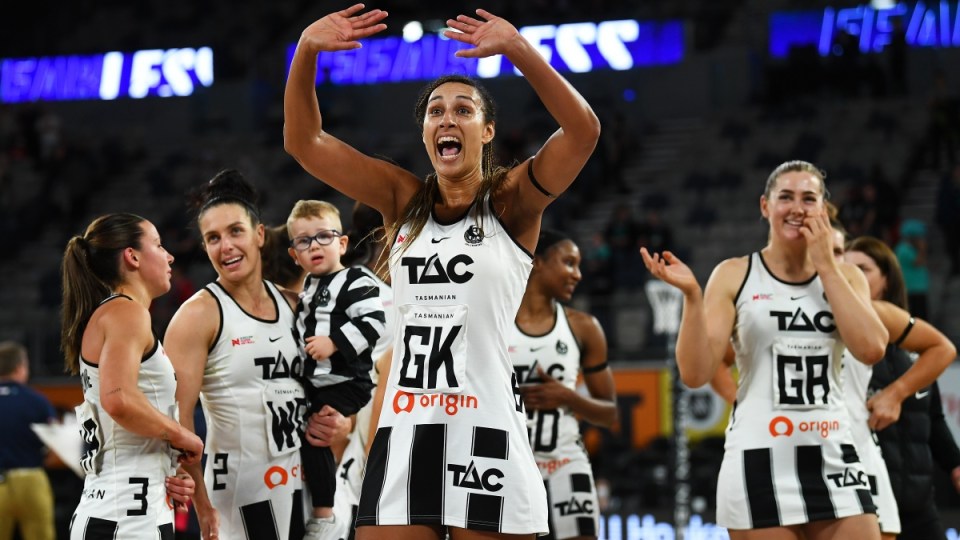 Geva Mentor of Collingwood reacts after her side's Super Netball boilover against the Vixens. Photo: AAP

The Magpies started the weekend in bottom place and the Vixens in top spot, but Sunday’s match confirmed the old adage that ladder positions mean little in derby clashes.

Collingwood, piloted by wing attack Kelsey Browne and centre Molly Jovic, was on song from the outset, establishing an early lead and staving off every attempted comeback from the Vixens.

“We hold the derby as a very important game for us,” said workhorse Browne, who racked up 34 feeds and 25 assists.

“It’s really exciting, I love how the media hype it up.

“For us to win and get two on the go, it’s so important for our season.

“The girls are over the moon.”

With Browne having the better of Liz Watson and Jovic shading Kate Moloney, the Pies seized the early advantage, leading 17-13 at quarter-time.

The Vixens endured a scoring drought to start the second term as the margin threatened to blow out but they recovered and did their best to chisel away.

Underdog Collingwood came out of the half-time break firing, slotting all 19 shot attempts, with Shimona Nelson rattling off 15 without a miss for the quarter to extend the Magpies’ advantage to 10 goals at three-quarter time.

The gap stretched to 13 early in the fourth as Nelson continued to present strongly.

She was aided superbly in the circle by Gabrielle Sinclar in the circle, while Browne and Jovic maintained their edge in the middle to cap a memorable victory for the Maggies who, after a rough start to the season, are finally finding momentum.

Their score equalled the competition-best haul posted by West Coast Fever, also against the Lightning, in the season opener in March.

In defeating long-time bogey side Sunshine Coast for the first time since 2018, the Giants had winners all over the court.