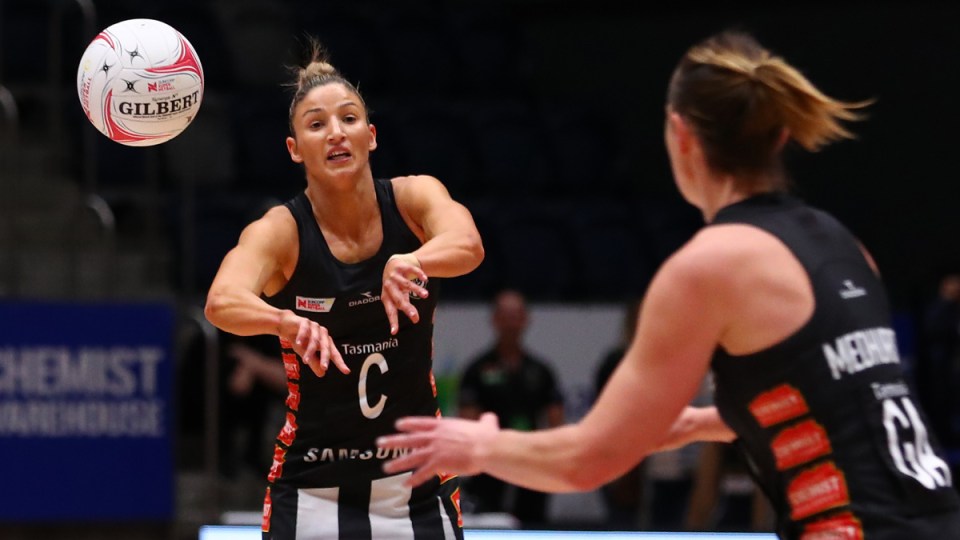 Magpie Kim Ravaillion passes in her milestone game that ended in a loss. Photo: Getty

Lightning defenders Karla Pretorius and Phumza Maweni menaced Collingwood’s shooters throughout and the contest was all but over at three-quarter time when the Magpies trailed by 13.

Sunshine Coast shooter Peace Proscovia seized on the gains made in defence to finish with 45 goals from 50 attempts, a 90 per cent success rate for the franchise who sit second on the competition ladder.

Former Australian captain Liz Ellis labelled Pretorius the best goal defence in the world after her six intercepts consigned Collingwood to its lowest ever score.

Young shooter Cara Koenen and replacement defender Jacqui Russell enjoyed court time for the Lightning in the final quarter while wing defence Maddy McAuliffe was treated to a run at centre in a display of the club’s depth.

“That was very important as we come towards the World Cup,” Pretorius said.

They’ll get some opportunities after the World Cup, and that’s the way we train. We feel like every player can be strong out on court.”

Midcourter Ash Brazill was one of few Magpies to shine on a disappointing day for the Melbourne club, which are one spot out of the playoffs in fifth.

Ravaillion’s milestone game could not have started much worse. She was responsible for four first-quarter turnovers, a tally that would usually take her a full game to reach.

Admittedly, Ravaillion was facing one of the league’s most fearsome defensive combinations in Pretorius and fellow South African international Maweni, who combined to produce an impressive performance as Proteas coach Norma Plummer looked on.

Ravaillion, who has only missed one game since her debut in 2013, clawed back some ground in the second half in her duel with Silver Ferns veteran Langman but was unable to drag her side back into the contest.