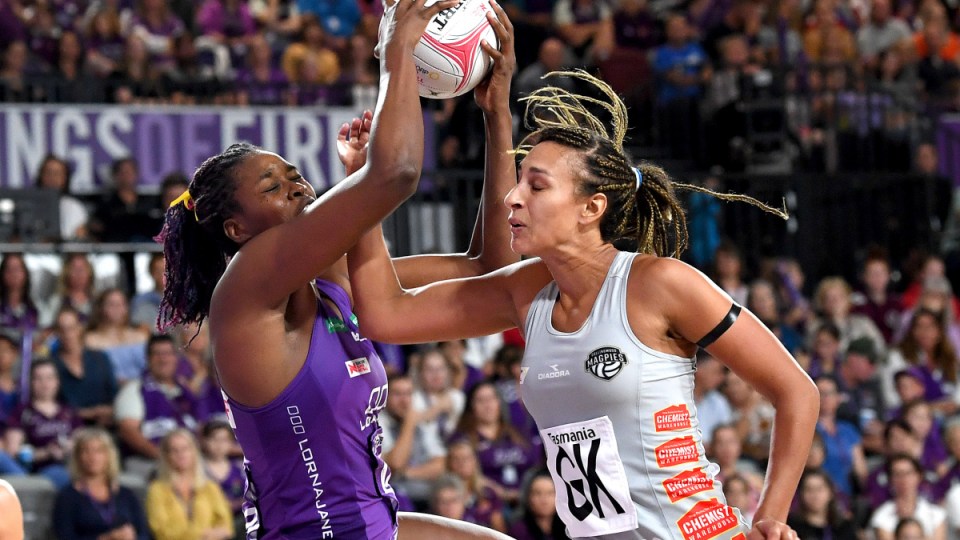 Tough in the clinches for Romelda Aiken of the Firebirds and Geva Mentor of the Magpies. Photo: Getty

The Queensland Firebirds and Collingwood have christened a new stadium with a memorable finish in a 57-57 Super Netball draw.

Both teams had control of Saturday afternoon’s contest at various stages before Firebirds defender Tara Hinchliffe helped her side to grab a share of the competition points before 4578 spectators at the Queensland State Netball Centre.

Collingwood led by a goal for much of the final term but Hinchliffe stepped up with an intercept and a handful of deflections.

Firebirds goal attack Gretel Tippett was outstanding, with 26 goals from 27 attempts while the Magpies’ Shimona Nelson had 42 goals at 89 per cent.

Collingwood’s well-drilled line-up was unruffled until a bloodied lip, split in a collision with Hinchliffe, forced their prized recruit Nat Medhurst off the court.

While the goal attack was being treated, momentum tipped back in favour of the home side.

Replacement goaler Gabrielle Sinclair, in just her second game, couldn’t orchestrate the same harmony as Medhurst when at her scheming best.

Powered by slick shooting combination Romelda Aiken and Tippett, the Firebirds built a nine-goal advantage towards the end of the first half.

As the pressure intensified in the third term, the Magpies stripped away the freedom they had previously allowed Tippett and the contest was again up for grabs.