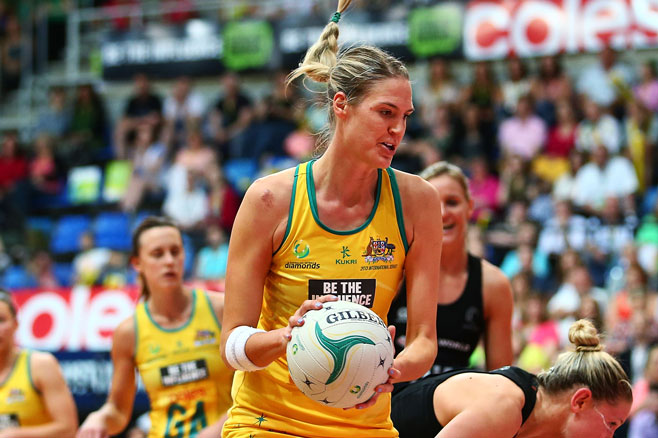 Australia have completed their international netball season with a 27-point second Test win over Malawi on the Gold Coast.

The 64-37 win is the Diamonds’ sixth victory in a row and completes a 2-0 series win over the Queens after the impressive 4-1 Constellation Cup success against New Zealand.

Despite the ease of the final margin, the match didn’t go entirely Australia’s way with the world No.5 Malawi making an impressive start.

Towering shooters Caitlin Bassett and Caitlin Thwaites played a half each for the Diamonds, scoring 18 and 28 goals respectively as Australia claimed a victory in their final international before next year’s Commonwealth Games.

Malawi star Mwai Kumwenda topped the scoring for the visitors with 25 goals from 28 attempts, ensuring Diamonds’ skipper Laura Geitz had a busy night in her first outing as national captain in her home state.

Only two goals in the final minute of the opening quarter prevented the visitors taking a lead into the first break, with the Diamonds up 13-12.

Australia stepped up their intensity in the second term, Bassett scoring 11 goals from 12 attempts as they pulled away for a 28-20 halftime lead including 8 of the last 10 goals in the half.

Those changes ensured Australia ran over the tiring visitors in the second half, with Thwaites dominant for the second time in the series.

After scoring 41 goals in just one half in the first Test, Thwaites scored an impressive 17 from 19 in the final term to ensure a comfortable win for the hosts.

Rating her team’s performance as an eight out of 10 display, a satisfied Alexander said the lessons learnt by playing a different opponent such as Malawi will stand the team in good stead.

“It wasn’t perfect but I think what everyone has to understand is Malawi put out a much better performance,” she said.

“Malawi are our fifth-ranked nation and they are and can be a thorn in everyone’s sides.

“From our point of view it was a great challenge to change our mindset completely as a team to really understand that we needed to play a different sort of attack game and we also needed to bring some discipline into our defensive games.

“All of those areas were tested, so that’s terrific for us.”

Geitz admitted her team was on a high after such a successful start to her captaincy but the sluggish start to Saturday’s match showed the team is far from a finished article.

“The thing for us is making sure we don’t get too confident,” she said.

“Throughout all the Test matches our start has been pretty ordinary … I don’t know whether it’s relaxed or we’re just not firing in our first quarter. There’s lots of things we need to address moving forward.”