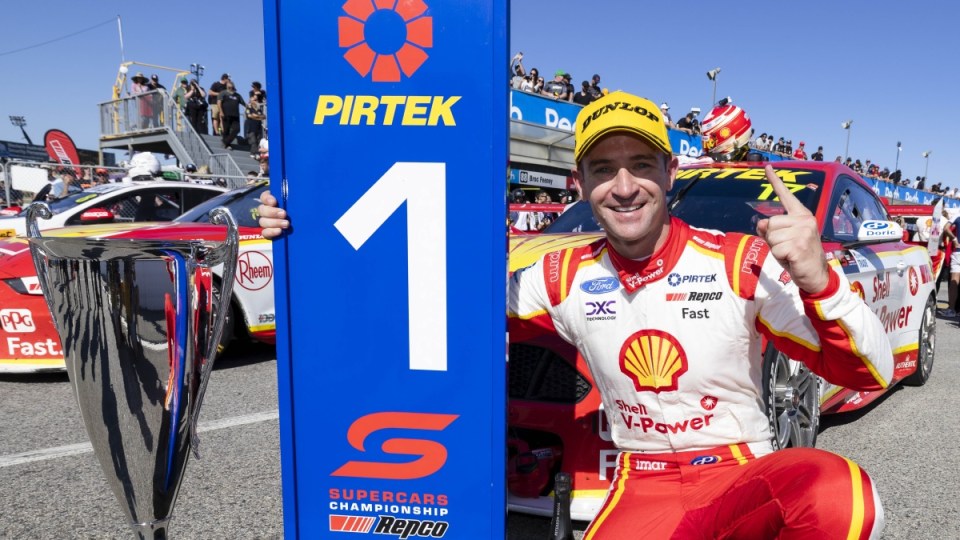 Ford’s Will Davison has spoken of his relief at ending a near six-year wait for a Supercars race win on drama-filled day in Perth.

The Shell V-Power Racing star then backed up that effort with a third place in Sunday’s second race, with championship leader Shane van Gisbergen winning his second race of the weekend with James Courtney runner-up.

Waters crossed the finish line first in Sunday’s opener but was bumped down to fourth in the order after a five-second penalty from race stewards for an unsafe re-entry while battling with Davison at the front of the field.

Davison was attempting to pass Waters in the 29th lap when the Tickford Racing star ran wide on the final turn, jumping back onto the track via a kerb in front of an aggrieved Davison.

When the penalty was announced Waters and team principal Tim Edwards were both livid, particularly given other drivers had done the same thing during the race without being penalised.

“First of all I wouldn’t have been out there if I didn’t get doored,” Waters said.

“I’m all for hard racing … I’ve been racing for years, everyone’s been doing that, no-one’s ever got a penalty for it, I’m the first one.”

Not here to say if the penalty was fair/not, but saying @will_davison pushed him off the circuit is simply wrong. Huge gap after turn in – Waters chose to run the outside of the kerb early. He peeled left before they even picked up the throttle on exit. You can hear it. #RepcoSC pic.twitter.com/rWeQlsVwG8

A delighted Davison was sympathetic to his rival’s plight but also believed he’d made a move which deserved reward.

His biggest emotion, however, was satisfaction at ending a winless run which has been a focus on his racing for too long.

“One of those things you don’t want to get fixated on, everyone asking you every weekend, it starts just getting on your nerves,” Davison said.

“In a really tough field at the moment, up against a lot a lot of fast guys in fast cars.

“Really nice to just sleep well tonight. Definitely relief’s more the word. Now we just get on with the job which is we’ve got to do more of it.”

Saturday race winner van Gisbergen’s hopes of a clean sweep were wrecked by an incident in qualifying earlier on Sunday morning in which his Commodore was baulked on a flying lap by Mark Winterbottom.

Starting the weekend’s second race from 11th, van Gisbergen managed to snare fifth in that event before bouncing back to claim his eighth win from 12 starts in 2022

“I did feel for Cam, like they could have maybe readdressed that straightaway not done what they did,” van Gisbergen said of the Waters’ penalty.

“That was pretty rude I thought.

“Finally to get a win for him (Davison), it’s really good.

“I would rather have won but damn Mark Winterbottom.”

The next stop of the Supercars championship is the Winton SuperSprint on May 21-22.