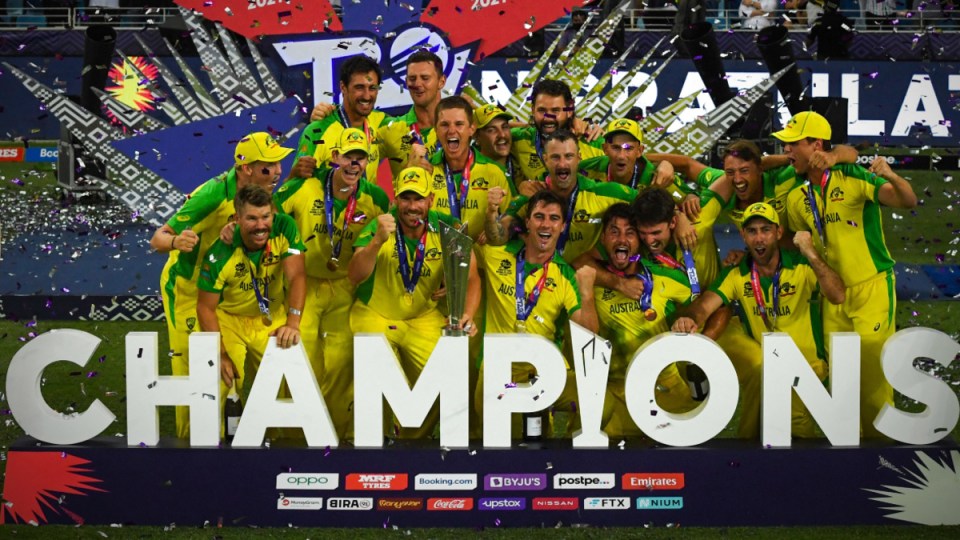 The drought is over! Australia secured an emphatic eight-wicket win over New Zealand in the World Cup final in Dubai. Photo: Getty

Half centuries to Mitchell Marsh and David Warner have guided Australia’s male cricketers to their first Twenty20 World Cup title, with an eight-wicket win against New Zealand in Dubai.

Little was expected of the Australian side after coming into the tournament with underwhelming series losses to West Indies and Bangladesh, but luck smiled on it as it comfortably chased down 173 to win in the early hours of Monday at a required run rate of 8.6 per over.

The Australian women’s team has won the T20 World Cup title five times, but the trophy has eluded the men for 14 years.

“To be the first Australian team to be able to do it. So proud of the way the guys went about the whole campaign.”

Coming in at 1-15 after the third over, Marsh set the tone for his commanding innings of 77 not out from 50 balls by hitting an 86-metre six and two boundaries from the first three balls he faced from Kiwi paceman Adam Milne.

And he continued in that rich vein of form, bringing up the fastest 50 in a World Cup final on his way to the tournament-winning innings.

“I just wanted to get out there and have a presence,” Marsh said.

Warner was back to his best in compiling 53 from 38 balls, and Glenn Maxwell (28 runs off 18 balls) helped close out the win with a switch hit with seven balls to spare.

Trent Boult was the pick of the bowlers for the Black Caps with 2-18 from his four overs.

Earlier, a batting masterclass by Kane Williamson helped New Zealand compile a total of 4-172 from its 20 overs.

The unsuccessful bowler on that occasion, Mitchell Starc, was made to suffer when Williamson scored 19 in that 11th over and then piled on the pressure by carving 22 over Starc’s next over (16th) to set up the competitive total.

The left-arm paceman finished with the deflating figures of 0-60 from his four overs.

After being limited to 1-57 after 10 overs, New Zealand scored 115 runs in the second half of the innings.

Australia started cautiously with only one run in Trent Boult’s opening over.

But after seeing Australian skipper Aaron Finch dismissed cheaply with a mistimed pull shot that was caught by Daryl Mitchell in the third over, Warner and Marsh set about attacking their Antipodean rivals with their aggressive approach.

Three balls after the break Warner brought up his 50 with a six off Neesham.

A quality finish to the tournament for David Warner #T20WorldCup pic.twitter.com/Q5yrAGpDJc

Boult was reintroduced in the 13th over and the move paid immediate dividends when he bowled Warner (53 from 38 balls) to bring his side back into the contest at 2-107.

But Marsh kept his focus to deliver the victory for the five-time 50-over world champions.

Warner was inspired by his batting partner, claiming Matthew Hayden’s record for the most runs scored (289) at a single T20 World Cup by an Australian when he passed 29.

Australia had early success when Finch won the toss and decided to bowl.

It was in keeping with the winning trend in Dubai, where 11 of the 12 matches played in the tournament were won by the team batting second.

All nine night matches before the final were won by the chasing side, with Australia winning all five of its matches when chasing a total.

No bowler has more wickets in the Powerplay than Josh Hazlewood's seven at this #T20WorldCup pic.twitter.com/byNWtXcTY9

New Zealand started brightly with 23 runs without loss in the first three overs, before Hazlewood made the breakthrough by having Mitchell caught behind by Matthew Wade.

Leg-spinner Adam Zampa then stopped the threat of big-hitting Martin Guptill cutting loose when he was caught by Marcus Stoinis for a restrained 28 off 35 balls – his slowest strike-rate in the tournament – to leave NZ at 2-76.

But just as Williamson threatened to take the game away from Australia, it was Hazlewood (3-16) who changed the momentum by dismissing danger man Glenn Phillips (18 off 17 balls) and Williamson in the 18th over to reduce the Kiwis to 4-149.

James Neesham (13 off seven balls) and Tim Seifert (8 off six balls) were the not out batsmen.

The Australians finished on a high when Marsh was named man of the match, while Warner was named player of the tournament.