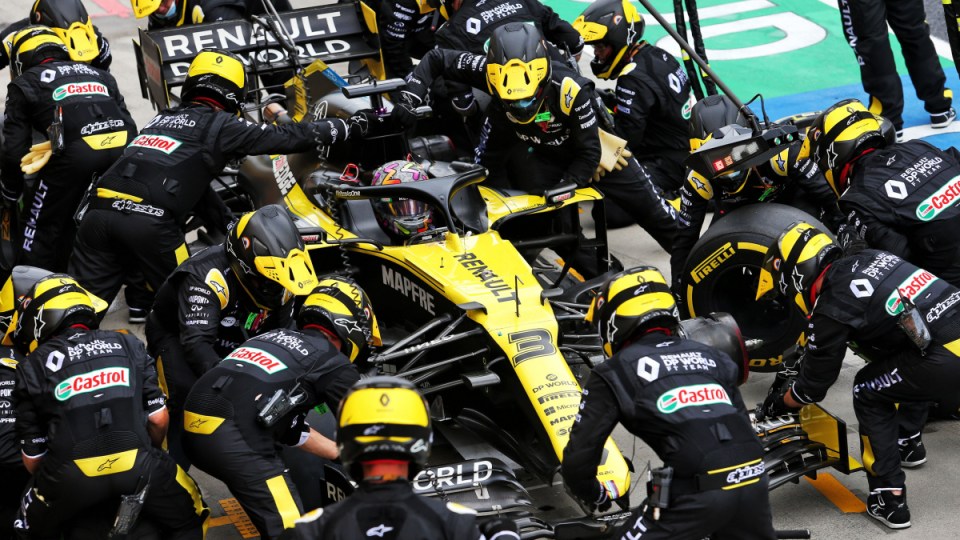 Daniel Ricciardo's team during one of the crucial pitstops at Budapest. Photo: AAP

Australian formula one driver Daniel Ricciardo has finally found some form in his mid-pack Renault, saying he’s not far from a top-six finish.

Ricciardo started 11th in the Hungarian Grand Prix overnight, but made the most of his tyre strategy to finish eighth.

“It was quite a busy race and, overall, I’m happy with how it went,” the West Australian said after the race in a team statement.

“I gave everything I could and I felt we got the most from it today.

“Our start was good and everyone around us went for slicks quite early on. We showed good pace on the Medium and almost caught the top six at the end.

“Eighth was all we could achieve in the end, though. We’ve had eighth in every race so far. It’s not bad, but I do feel we have the speed for more from the first three races.

We’re not far from top-six finishes. It’s coming, and we know bigger points are around the corner.

Ricciardo is leaving Renault for the up-and-coming McLaren at the end of the season, although the French team edged out the orange cars at Budapest.

After the race Renault lodged another official protest against another  rival Racing Point, questioning the legality of their Mercedes-lookalike car.

The French manufacturer team first protested after the Styrian Grand Prix in Austria on July 12, with stewards investigating.

Repeat protests had been expected, with Renault allowed to continue to lodge them at all races until the matter is resolved.

Stewards said Renault were protesting about the same brake ducts as previously.

Racing Point ended Sunday’s race at the Hungaroring with both their cars in the points.

Formula one: Daniel Ricciardo has top-six ambition for improving Renault