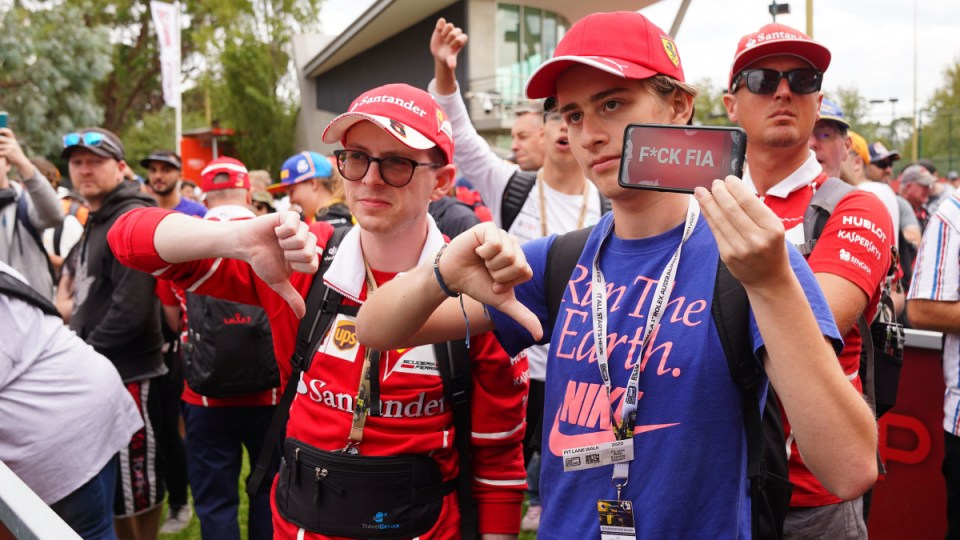 These disgruntled formula one fans wanted to take their chances in the Albert Park crowds. Photo: AAP

The AFL has moved to lockout fans for the start of the season in the latest move to try and stop the spread of the coronavirus.

AFL chief executive Gillon McLachlan today said the no fans would be admitted to AFL or AFLW for the “foreseeable future”.

The AFL season begins with the Carlton v Richmond blockbuster on Thursday night at the MCG.

“The health and safety of fans, players, umpires, officials, partners and communities is the priority, so it is important that we take the advice of those that know best, and that advice right now is to continue with matches but not to host mass gatherings which can put everyone at risk.” McLachlan said.

The landscape is changing quickly, each organisation has their own set of challenges, but our clubs, players, officials and fans know that the health and safety of all is the No.1 priority.”

The AFL’s move came 24 hours of confusion over the status of the Australian Grand Prix at Albert Park, organisers on Friday finally succumbed to the reality that the event could not go ahead, with or without fans.

The NRL, however, has has allowed matches to proceed with fans this weekend, including Friday’s debut match at the Cowboys’ new stadium in Townsville.

Australia’s chief medical officer on Friday advised governments that all public gatherings of more than 500 people should be cancelled although A-League and W-League soccer games are also set to go ahead with crowds this weekend.

FFA head of leagues Greg O’Rourke had said measures to prevent health problems were “scalable”, including the potential for games to be played behind closed doors if the situation escalated.

Certainly, the Australian Grand Prix appeared doomed from the moment a positive coronavirus case was identified within the teams’ paddock.

World champion Lewis Hamilton had on Friday criticised staging the race after a McLaren team member was put into isolation.

As health authorities worldwide began recommending against events that attracted large crowds, Formula One lost its race against time to stay ahead of the unfolding pandemic.

With a majority of teams voting overnight to abandon the Melbourne Grand Prix, former world champions Sebastian Vettel and Kimi Raikkonen were reported to have left Melbourne on the first available flights.

As organisers took further advice from health officials – while the lawyers likely looked to the sub clauses in insurance contracts – race fans were left outside the gates waiting to see if the on-track schedule would go ahead.

It was not a good look for Formula One, but it is a dilemma that other sports, albeit with less logistical nightmares, will have noted.

Soccer’s English Premier League has convened an emergency meeting for late Friday (Melbourne time) after it was revealed that Arsenal manager Mikel Arteta had contracted coronavirus.

The Spanish coach’s diagnosis led to his entire squad being quarantined.

Golf’s PGA Tour has scrapped the rest of The Players Championship and shut down all other tournaments for three weeks.

Commissioner Jay Monahan said there would be no fans at the TPC Sawgrass for the final three rounds, or at the next three tournaments on the PGA Tour schedule.

The US NBA basketball season has been suspended for 30 days, with NBA commissioner Adam Silver indicating the entire season could be in jeopardy following Utah Jazz centre Rudy Gobert’s positive coronavirus diagnosis.

Cricket Australia also announced on Friday morning that fans would be locked out of Australia’s three-match men’s ODI series against New Zealand.

Melbourne Racing Club has also imposed a spectator ban at Caulfield’s All-Star Mile Race Day on Saturday, although at this stage it is expected Sydney’s Rosehill race meeting will be open to racegoers.

It’s an issue the AFL is going to have face this week, along with more thought from the NRL, with the local football season just about to get into full swing.

AFL chief executive Gillon McLachlan said planning was ongoing for round one at the MCG next Thursday, but playing in empty stadiums or delaying matches was a possibility.

While Formula One has taken plenty of social media heat for its late call to stop the Australian Grand Prix, chief executive Chase Carey said on Friday the situation had evolved rapidly in the past four days.

“We are a sport travelling around the world that really started to move everything here last weekend, so there is a lead time to what we do,” Carey said. “In hindsight it obviously looks different.

“I think it was an accumulation of facts that led to the decision, certainly the infection of the McLaren individual was one. But really the situation has continued to change rapidly …

Clearly the situation here was very different than it was on Sunday … when you had a [cricket] event with close to 100,000 people here on the ground.

“We spent last evening really getting input from everybody … as can be expected there were a range of views … that’s what everyone tried to wrestled through, but I think we got to the right place and I think that we all agreed that we made the right decision.”

“We are a sport travelling around the world that really started to move everything here last weekend, so there is a lead time to what we do. In hindsight it obviously looks different.

Australian Grand Prix chief executive Andrew Westacott said at all times his team had been guided by Victorian health officials.

An emotional Westacott paid tribute to F1’s fans and staff, saying it was important public health was protected.

“Sport is a wonderful thing that brings us all together, but also in these changing times around the world we need to be very mindful of the input of the health authorities …”

“We are disappointed not to be able to race in front of the passionate Australian fans who have shown such support of our team and Daniel, however the health and safety of our team members and the wider F1 community is of paramount importance,” it said in a statement.

Having this week avoided a scheduled media conference an been pictured ‘elbow bumping’ with Robbie Williams, Ricciardo also tweeted his disappointment.

Eight F1 team members had been tested for coronavirus. Results released on Thursday revealed one, from McLaren, had tested positive to the potentially deadly virus.

McLaren subsequently withdrew from the event, which was to start on Friday with practice sessions for Sunday’s grand prix.

“The decision has been taken based on a duty of care not only to McLaren F1 employees and partners but also to the team’s competitors, Formula 1 fans and wider F1 stakeholders,” McLaren said.