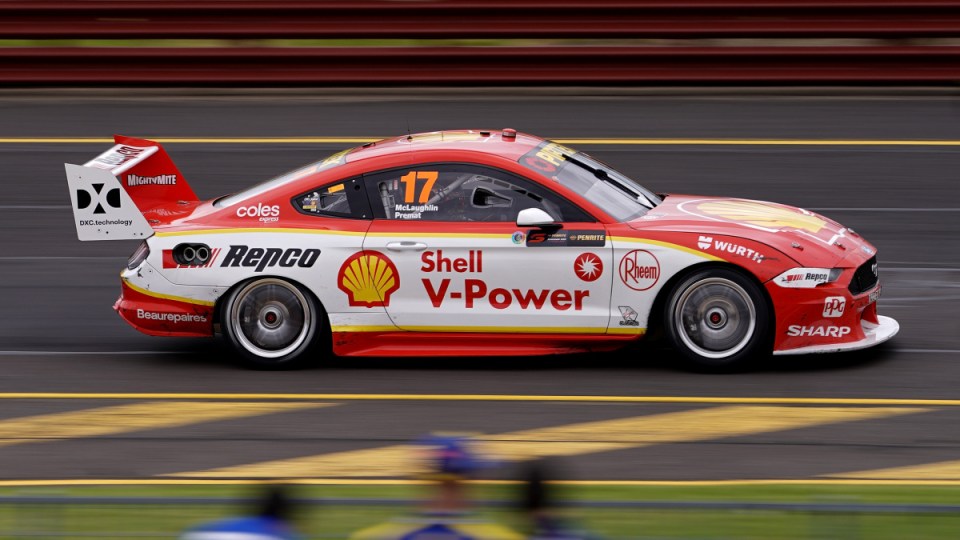 No win, but the title: Scott McLaughlin was on the tear at Sandown, but could only finish ninth. Photo: AAP

Ford driver Scott McLaughlin has secured the 2019 Supercars championship on despite being penalised for an engine rule breach at the Bathurst 1000.

Forced to start Sunday’s Sandown 500 from the rear of the grid due to the breach, McLaughlin and co-driver Alex Premat finished ninth.

That result ensures the DJR Team Penske star has an unassailable 550-point championship lead heading into the season finale later this month in Newcastle.

Van Gisbergen was cruising to his first Sandown crown after a marvellous drive by Tander hauled them from 24th on the start line to third when the three-time Bathurst winner handed over the Commodore 72 laps later.

The New Zealander was able to get the jump over Whincup in the final round of pit stops and held a healthy lead when his right rear suspension suffered an issue which forced him to pit.

By the time van Gisbergen rejoined the race, Whincup was long gone and the Kiwi could only limp home 17th.

The victory is Lowndes’ sixth Sandown 500 win and Whincup’s fifth.

Controversy hit before the start of the race with stewards announcing McLaughlin’s Ford Mustang had run an engine which breached regulations during qualifying and the top 10 shootout at last month’s Bathurst 1000.

As a result, McLaughlin and Premat were sent to the back of the grid while DJR Team Penske were fined $30,000.

McLaughlin also had his Bathurst pole position and lap record scrapped but retained his race due to the engine having been replaced before the 1000km event at Mount Panorama.

It’s the second fine issued to DJR Team Penske since the controversial Bathurst weekend. A partially suspended $250,000 fine and the loss of 300 team championship points were imposed after Fabian Coulthard was directed to hold up the field during a late safety car.

Coulthard was relegated to 21st after the “go slow” tactics allowed leading duo McLaughlin and Whincup to pit without conceding track position.

In a statement, DJR Team Penske on Sunday emphasised their belief McLaughlin’s engine was within regulations and it was never their intent to break any rules.

They attributed the breach to a failure to incorrect measuring of the engine in the assembly process or damage to the engine contributing to a change in the “maximum valve lift in the forward cylinders”.

“In some ways, I’m just glad the whole Bathurst thing is over and we can get on with some motorsport,” McLaughlin told Fox Sports before Sunday’s race.

The aftermath of Bathurst was tough for everyone in the team. It’s been a tough month.”

Holden’s David Reynolds didn’t even get to race a single lap at Sandown after co-driver Luke Youlden and David Wood tangled on lap 30, the collision sparking a safety car and damaging Reynolds’ Commodore beyond repair.

That was the only safety-car incident of the entire race, as McLaughlin kept himself out of trouble to secure his title.