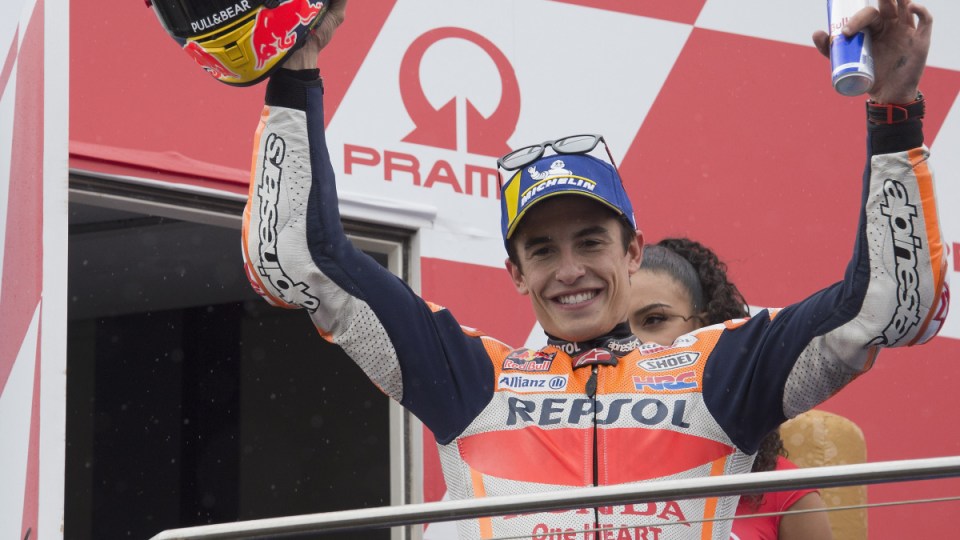 With rain threatening, Marquez (Repsol Honda) overtook leader Maverick Vinales (Monster Energy Yamaha) on the last lap of Sunday’s 27-lap race, with Vinales crashing out as he desperately tried to retake the lead.

His misfortune allowed Cal Crutchlow (LCR Honda) to finish second, with a jubilant Miller, who started from ninth on his Pramac Racing Ducati, claiming his first home race MotoGP podium.

The win was Marquez’s 11th of the season, his fifth in a row and 55th career victory for Honda in the premier class, surpassing Australian legend Mick Doohan who finished his career with 54.

“It’s incredible because Doohan is the first rider I have in my memory,” Marquez said.

“It’s an incredible victory because we weren’t the fastest on the track. Maverick was faster than us, but I was waiting for him.

“We slowly cooked the victory in a good way.”

It was a bitter pill for Vinales to swallow.

The Spaniard dominated all three practice sessions and stormed to pole position half-a-second ahead of Fabio Quartararo (Petronas Yamaha SRT) in second, with Marquez starting from third.

Marquez stalked race leader Vinales during the last 10 laps after the pair had opened up a sizeable gap on the rest of the field and pounced as they crossed the start-finish line on Gardner Straight.

Second place meant a lot to Crutchlow, who suffered a badly broken ankle in a horror practice crash last year at Phillip Island.

“Crashes don’t normally faze me – I get back up and go faster straight away, but that crash has haunted me for the whole year,” Crutchlow said.

“I wasn’t happy coming to this grand prix thinking about it and what could happen because it was a big crash and I’ve never really been injured in that way.

“It could have been career-ending so, to finish on the podium here, is very special.”

Miller saluted his home crowd with a customary shoey celebration.

“I didn’t expect to be on the podium but I’ll take it,” Miller said.

“I tried not to do what I’ve done in the past which is lead then be scrambling with no grip at the finish.

I can’t thank the team enough … it’s been a difficult, trying weekend.”

Rookie of the year Quartararo was taken out on the first lap in a scary collision with Danilo Petrucci, who flipped over the high side of his factory Ducati as the field went through the Southern Loop.

Italian superstar Valentino Rossi led his 400th race into turn one after a superb start from fourth position, but was unable to sustain that pace, fading to eighth.

The wild weather that wreaked havoc at the exposed island circuit and forced qualifying to be postponed abated overnight, allowing grid positions to be finalised.