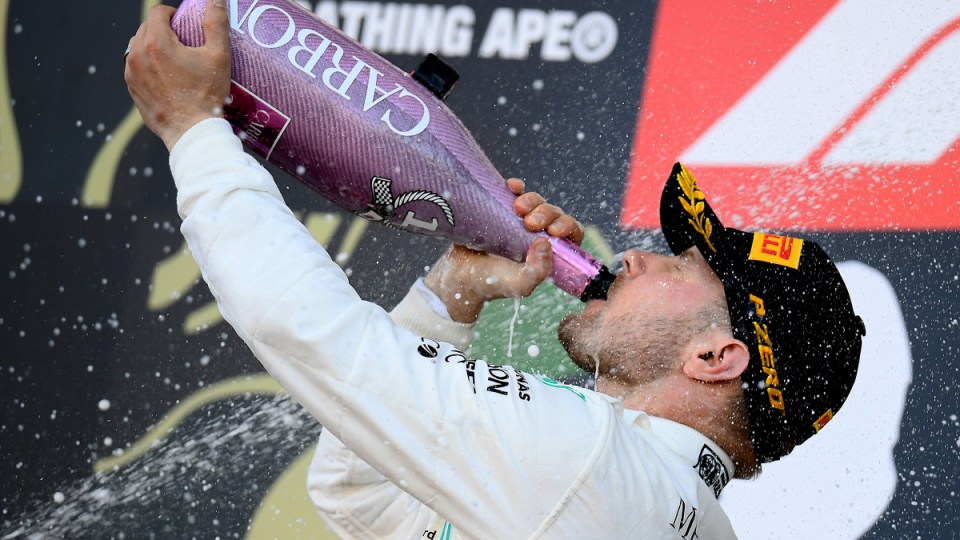 Australia’s Daniel Ricciardo has finished seventh at the Japanese Grand Prix in a race that saw Valtteri Bottas win and his Mercedes team wrap up a sixth consecutive formula one constructors’ championship.

Bottas took the checkered flag at Suzuka ahead of Sebastian Vettel in a Ferrari and Mercedes teammate Lewis Hamilton, who can capture his sixth world championship title in two weeks at the Mexican GP.

Ferrari had taken a one-two in the day’s earlier qualifying – put back to Sunday as a result of Typhoon Hagibis – but the Italian team’s race was compromised within seconds of the start.

Bottas was able to jump both Ferraris from third on the grid to take the lead, and went on to win his third race this season and the sixth of his F1 career.

The results – with Ferrari’s Charles Leclerc sixth – means only a Mercedes driver can win the drivers’ title, making it a record sixth constructors’ and drivers’ title double for the team.

Pole-sitter Vettel lost his lead from the start when he nudged forward and stopped before accelerating, but was cleared by stewards of making a false start.

Teammate Leclerc hit the Red Bull of Max Verstappen on the first turn.

The Dutchman spun off and later vented his anger over team radio after hearing there would be no investigation.

Stewards reviewed the incident again and said it would be looked at after the race.

Both drivers were able to continue but Leclerc’s front wing was damaged and a piece later flew off, knocking the wing mirror off Hamilton’s car behind him. Verstappen eventually had to retire on the 15th of 53 laps.

Ricciardo started 16th and worked his way through the field in his Renault for a strong points finish.
“The team deserved this result today,” Ricciardo said in a team statement.
“We’ve been on a bit of a frustrating run recently without scoring, so to take seventh today is excellent.
“We had an issue in qualifying with the rear of the car that the boys fixed, which explained why we were quite far down. We had good pace in the race and were coming through quite nicely.
“Starting on the medium tyre worked to our advantage and we came through the pack with some enjoyable battles. It was nice to execute a good strategy. We pulled through and, in the end, it was a deserved and quite comfortable seventh place.”

Conditions were dry but blustery after the typhoon had moved further north and, after the early drama, Bottas was able to build up a lead from the front.

It became a question of tyre strategies and Hamilton, at one stage, appeared unhappy with his team’s tactics.

After second stops by Vettel and Bottas, Hamilton was able to lead from lap 37.

Bottas on the faster softs to Hamilton’s mediums was 10 seconds behind with 15 laps to go and was told his teammate would have to pit again.

That turned out to be the case with 10 laps remaining, putting Bottas back in the lead, more than 10 seconds ahead of Vettel and 15 seconds up on his teammate.

Hamilton on the fresher tyres was able to attack Vettel towards the end, but he was unable to get into a position to overtake and had to settle for third as Bottas took the flag.