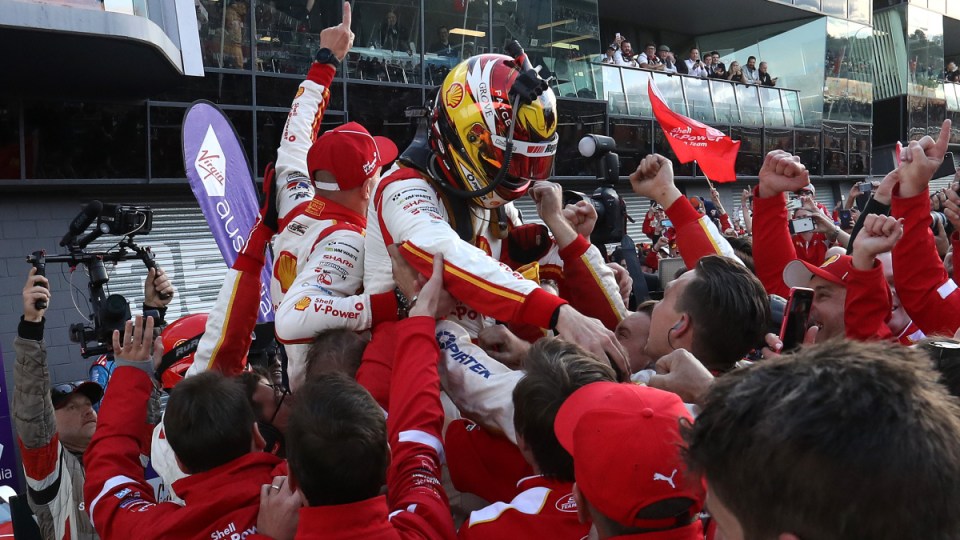 Scott McLaughlin is lauded by his crew after getting out of his Mustang as a Bathurst winner. Photo: Getty

The Bathurst 1000 has long been the jewel in the crown of Australian motorsport, but the way the great race continues to find new way to surprise should not be underestimated in its ongoing hold on the nation’s imagination.

The 2019 edition had all the thrills and spills we’ve come to expect from the all-day, 161 lap endurance event around Mount Panorama, and the fact the race was won by a Kiwi and a Frenchman speaks volumes for its International appeal.

In the end, the six-hour marathon was turned on its head with 10 laps to go, with two safety cars that threw the leading teams’ strategies out the window and brought everything down to a go for broke final-lap sprint.

Supercars series leader Scott McLaughlin and his teammate Alex Permat were the winners in their Mustang GT, a result that had seemed pre-ordained given their domination in qualifying, but Holden’s Shane van Gisbergen gave everything in trying to break his Bathurst in his Holden.

“I just threw it in over the top and hoped that I had a bit of a gap going down Conrod (Straight) and, thankfully, she held on and we got the ‘w’,” said an emotional McLaughlin, whose co-driver was Alex Premat.

“You always believe you can (win the Bathurst 1000), but it’s Bathurst.

I’ve had plenty of bad ones where I’ve gone off the track, hit the wall. I’m stoked. We got it done. I don’t care now, I’m a Bathurst winner!”

The great race has always created this sort of longing in the imagination of aspiring drivers, with many motorsport fans having made the trek to Bathurst just to drive their own stock cars around the famous track.

It’s a dream to many just to be at Bathurst and camp on the hill, but increasingly it is becoming a destination of choice for International professionals, with even former formula one champion Fernando Alonso tipped to one day take his chances around the tough mountain track.

McLaughlin extended his series lead over nearest rival van Gisbergen to 622 points after claiming his first Bathurst in seven attempts.

McLaughlin’s stirring victory marked the first time in 10 years a pole sitter had emerged as King of the Mountain.

But DJR Team Penske’s co-owner Dick Johnson had to wait much longer for success. The victory marked DJR’s first Bathurst triumph since he claimed the crown in 1994.

“Because I am a lot older, things feel a lot different, I can tell you, but it doesn’t feel any different when you win something,” Johnson beamed.

American great Penske – who is DJR Team Penske’s majority shareholder and also owns NASCAR and IndyCar teams – ranked the victory as one of his best.

“I think the race is right at the top,” he said. “The only race we (Team Penske) haven’t won is Le Mans but to stand with these guys was pretty special.”

McLaughlin made his move after trailing Holden star Jamie Whincup – who finished fourth – late in the race.

Penske said it was a great reward for a hardworking team.

“I just can’t believe how it turned out,” Penske told Channel Seven. “I’m just so proud of everyone … It’s one off our bucket list now, but what a great champion.”

Earlier, Chaz Mostert’s co-driver James Moffat surrendered the lead at the halfway mark of the Bathurst 1000 after stalling in the pits.

Moffat was comfortably leading the field on Sunday when he pitted his Ford, but dropped back to third when he re-emerged on the track due to his garage gaffe on lap 81.

McLaughlin broke the race lap record with a time of two minutes, 05.45 seconds early, eclipsing Holden star David Reynolds’ 2018 mark by a whopping 0.69 of a second. But early safety cars upset the established order and from there it became a race of attrition and strategy.

But co-driver Premat dropped from first to fourth during his stint after McLaughlin pitted following the 17th lap.

On lap 49, Premat was pressured by Mostert into a mistake, locking up at The Chase and damaging a front tyre to drop back in the field.

Van Gisbergen was closing in despite losing positions on lap 43 when his door refused to close properly.

Van Gisbergen at one stage was forced to drive one-handed as he tried to jam the door closed.

Lowndes is the fan favourite to win after teaming up with seven-time series champion Whincup in his first race since retiring last year from full-time driving.

Lowndes, 45, has reunited with Whincup after their three-straight Great Races from 2006.

There was drama before the race with Holden wildcard Brodie Kostecki failing to complete the formation lap due to carbon dioxide poisoning from a driver cooling system failure, delaying the start of the Bathurst 1000 by 15 minutes.

The team received permission for his cousin Kurt Kostecki to drive but Brodie was later cleared by medical staff.

Fans didn’t have to wait long for the first safety car with Holden’s Tim Slade hitting the wall at the exit of The Cutting on the first lap after contact with fellow Holden driver Scott Pye.