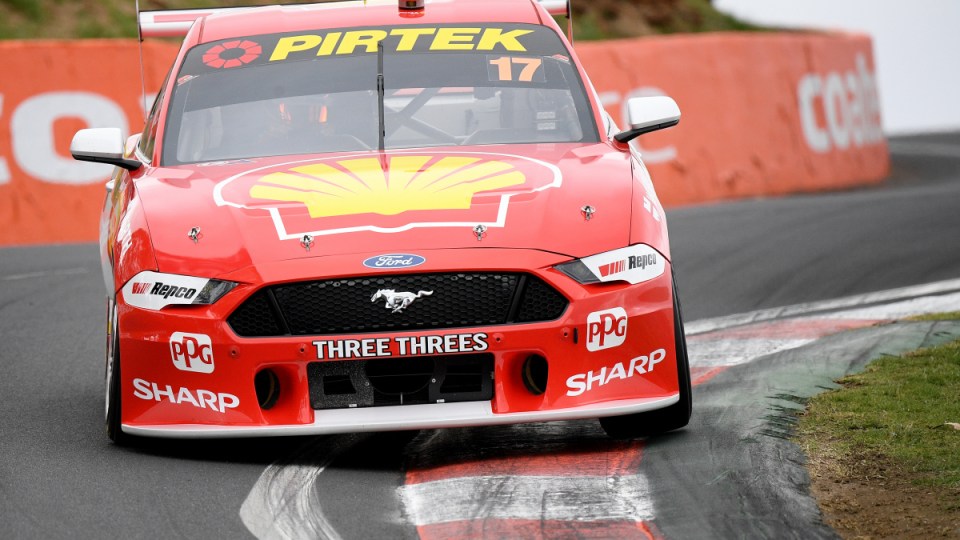 The Mustang of Scott McLaughlin heads ver the mountain at Bathurst on its way to another lap record. Photo: AAP

The Ford Falcon may have been killed off along with the Australian motor industry, but there’s just a hint of the famous 1977 Ford one-two finish about Sunday’s Bathurst 1000.

Indeed if one sees the Mustang GT as the natural heir to Ford’s most famous exploit on the mountain, then expect a one-two-three finish.

In Saturday’s Top Ten shootout the the top three places on the grid went to the ponies, with Supercars series leader Scott McLaughlin again setting another lap record to claim pole position.

It was McLaughlin’s third lowering of the bar this weekend – his two minute, 03.37 seconds ahead of fellow Ford drivers Chaz Mostert and Cam Waters taking 0.11s off the mark he set on Friday.

McLaughlin claimed pole 0.41 of a second faster than 2014 Bathurst champion Mostert and in the aftermath he didn’t hold back about the power of his Mustang.

“I am really proud of the team. Far out – this is just a rocket ship,” McLaughlin said. “It just hooked up in those conditions. I am just pumped.

Coming down the hill, I knew it was fast. I thought ‘gees this is good, I just have to hold on to it’.

“We’ve got one big one to get tomorrow which is what I am focusing on.”

McLaughlin, who has yet to win at Bathurst, will need to overcome the fact that no pole sitter has claimed the race since 2009.

Thanks to the storied Holden v Ford rivalry of Brock, Moffat and Johnson, the 1000 marks the one day of the year when even the most cycle-bound Australian tunes into motorsport

Indeed, it emerged on Saturday that the great race has piqued the interest of dual formula one world champion Fernando Alonso.

Brown – who also co-owns Holden Supercars team Walkinshaw Andretti United – said the Bathurst 1000 intrigued Alonso and a wildcard could be offered as soon as 2020.

“I will say I have spoken to him about Bathurst,” Brown said. “He considers it as a major race that he would like to win.

“He’s been around my Supercar that I have that won the race not that long ago, so he is fascinated by it.”

Asked what Alonso thought of his Supercar, Brown said: “He thinks the Supercars are cool.”

Walkinshaw Andretti United’s Bathurst wildcard this year went to IndyCar stars Alex Rossi and James Hinchcliffe and the Holden heavyweights have not ruled out handing out another next year.

Since leaving F1, Alonso has contested the IndyCars’ Indianapolis 500, had a World Endurance Championship campaign, won the Le Mans 24 Hours last year and claimed the Daytona 24 Hours crown in January.

The Spaniard has been a regular visitor to Australia at the Grand Prix in Melbourne, famously walking away from a huge crash at Albert Park in 2016.

With all motorsport eyes focused on Bathurst on Sunday, the sport’s governing  body, the Confederation of Australian Motorsport (CAMS), took the opportunity to announce it’s rebranding as Motorsport Australia.

CAMS president Andrew Papadopoulos said the name change would help better represent motorsport in the country at all levels.

“There are many reasons for this name change and we feel that the sporting, government, participation and commercial benefits are certainly among the key reasons the board voted to make this historic change,” Papadopoulos said.

He said the Australian motorsport governing body’s responsibilities would remain the same despite the name change.

“Anyone who may be looking to get involved in the sport will now know the first port of call will be Motorsport Australia and will not be confused about what our role is,” he said.

“We know from our own experiences … Confederation of Australian Motor Sport didn’t necessarily express the leading role we play to those unfamiliar with our sport.”