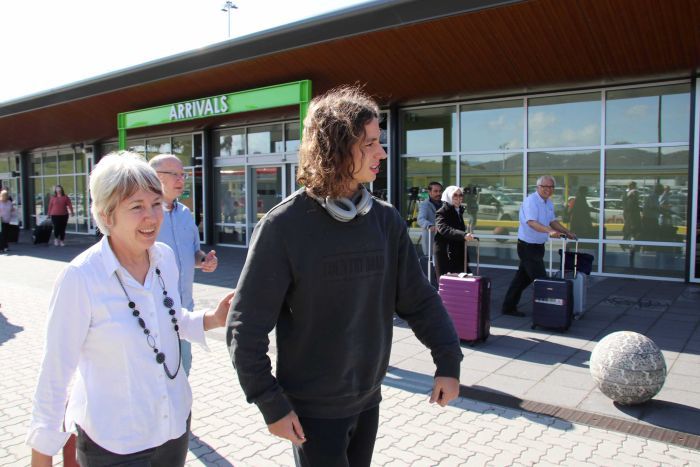 Alex Peroni at Hobart airport with his mother. Photo: ABC

As Tasmanian formula three driver Alex Peroni recovers at home with a fractured vertebrae after his huge Monza crash, formula one ace Daniel Ricciardo says his countryman was potentially saved by the halo safety bar that is now mandatory in open-wheel race cars.

Peroni’s car got airborne when it hit a sausage kerb at Monza earlier this month, flipping backwards and upside down into a barrier.

Peroni, 19, was knocked out and suffered a fractured vertebra and last week returned to Hobart to recuperate, wearing a back brace.

Ricciardo told The New Daily from Singapore recently “it was a very scary crash” and acknowledged Peroni was lucky to escape relatively unscathed.

The Australian Renault driver had been a strong supporter of the halo device when it was first proposed and is still controversial.

It was first mooted in the aftermath of the death of Ricciardo’s friend Jules Bianchi, who sustained head injuries in a freak accident at the 2015 Japanese Grand Prix.

Stewards moved the sausage kerb for the formula one race at Monza after Peroni’s crash, with Ricciardo ultimately finishing the Italian Grand Prix in fourth.

It obviously did land on all that part, so I would say the halo definitely did help with it.

“I spoke to him a little bit after and was messaging him and he seemed in good spirits, so it was a bit of a freak one.

“Unfortunately, obviously he’s got an injury, but fortunately he’s OK. But, I would say the halo did … definitely give them a bit of extra protection on that.”

Peroni’s accident came only a week after the death of Anthoine Hubert in the Formula 2 category on the Belgian Grand Prix weekend, although in that accident the halo played no role because of the head-on, high-speed nature of the contact between two cars.

“Especially after the events that happened the week before with Anthoine Hubert … I was very lucky to walk away,” Peroni told the ABC when arriving back in Tasmania.

Peroni is missing the final F3 season race at Sochi, Russia next weekend, which will also see the F1 cars and Ricciardo back in action.

Ricciardo said Peroni is one of a number of Australians pushing up through the open-wheel racing ranks, although with his own commitments on race weekends he has a tough time keeping up with their progress.

“I’m definitely keeping an eye on the guys that travel with us, for sure,” Ricciardo said.

“Alex, I’m always watching these races … and I literally had a text prepared during the race just before he crashed because he was going so well and I was gonna say ‘Awesome, awesome race buddy’ and then that happened. So I sent a little bit of a different text.

“I’m watching him a lot and definitely any of these Aussies that are going to be on the scene and in Europe, I will keep an eye on them. But, yeah, unless they are there on the F1 weekend it is hard to track all of them.”

Ricciardo had a difficult race weekend in Singapore, falling foul of technical regulations in qualifying and being dumped to the back of the grid after qualifying eighth fastest. He ultimately finished 14th.