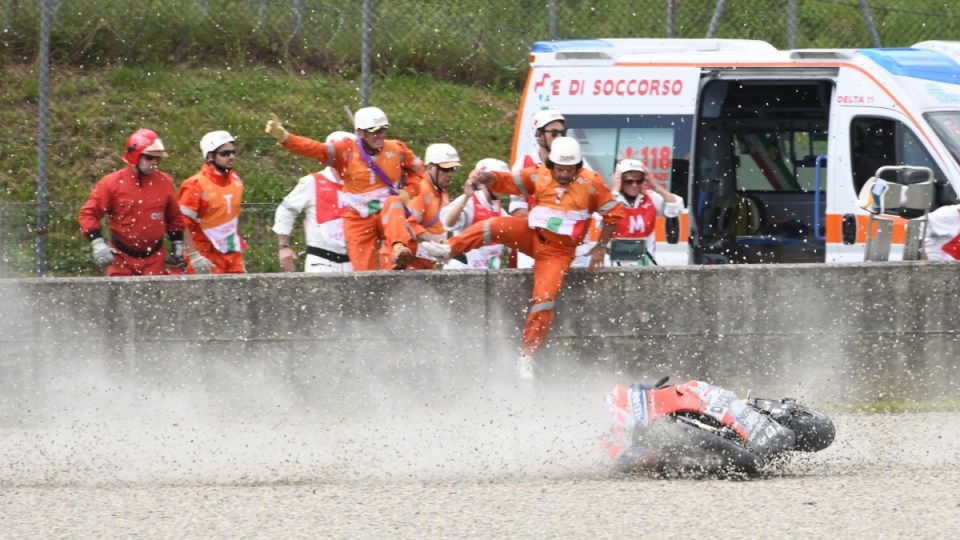 Ducati factory rider Michele Pirro has been taken to the hospital after an accident during practice for the Italian Grand Prix.

The 31-year-old Pirro, a Ducati test rider and occasional wildcard race entrant, has regained consciousness and is talking and moving but will undergo further tests.

The Italian was second in the afternoon practice session, hitting 350kmh at the end of the fastest main straight in MotoGP when his bike’s rear tyre lifted off the ground, throwing him off the bike and high up into the air.

His limp body rolled and bounced several times on the ground before coming to a stop.

He was immediately attended to by medical staff and taken to the Mugello circuit’s medical centre before being transported by helicopter to the hospital.

“Pirro suffered a cranial concussion, he lost consciousness but then regained it. His spinal column seems fine as does the rest of his neurological condition,” Doctor Michele Zasa said.

Fellow Ducati rider Danilo Petrucci said after the incident that Pirro might have had a brief malfunction of his front brakes, and reacted by braking too hard.

The Ducati team would not speculate about a cause of the crash until they had a chance to study data from Pirro’s bike.

Ducati racing director Paolo Ciabatti told journalists that Pirro had come away remarkably unscathed but would probably not race on Sunday.

“He has a huge concussion and a lot of pain on the chest and on the lower part of the body,” he said.

“The doctors will keep him [in hospital] for a few more hours if not for the night, and I think most probably they will declare him unfit for the race.”

Ciabatti said Pirro had been unconscious when medical staff reached him, but woke up when his dislocated shoulder was put back in.

After the practice session was restarted, fellow Ducati rider and championship hopeful Andrea Dovizioso suffered an engine fire on the same straight, but was able to pull off the track safely.

Dovizioso won the 2017 Italian Grand Prix, his first of six victories last year as he became the most successful Ducati rider since Australian Casey Stoner.

He finished the session only 12th fastest.

Andrea Iannone of Team Suzuki Ecstar was the quickest man on the Autodromo del Mugello track on Friday, after finding out this week that his contract with Suzuki would not be renewed for next year.

The Italian recorded a best lap time of 1:46.735 — which is 0.387 seconds swifter than the next fastest rider, Maverick Vinales.

Australian Jack Miller was fifth fastest on his 2017-model Ducati, continuing a strong start to his 2018 campaign.