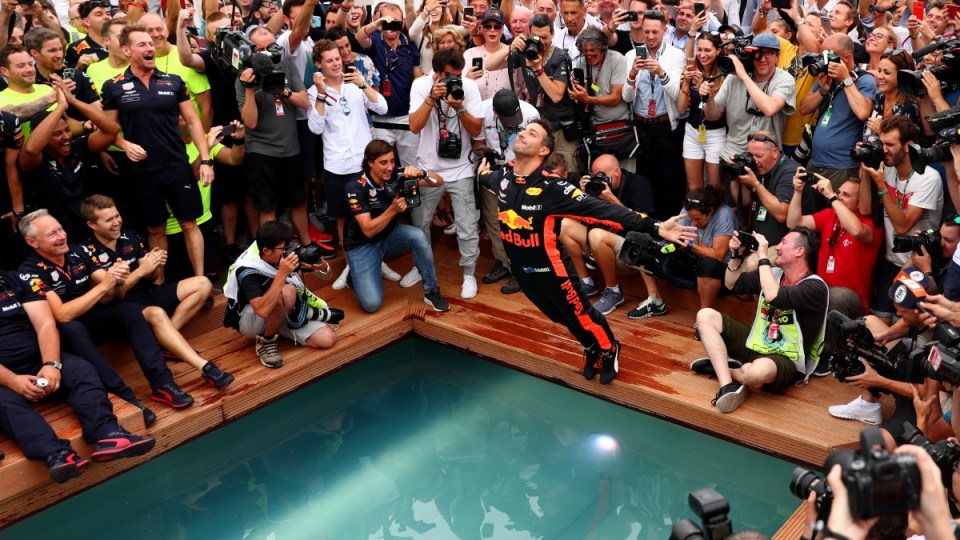 Everyone is waiting for Daniel Ricciardo to take the plunge on a new contract. Photo: Getty

Having rocketed to third in the Formula One title standings after Sunday’s Monaco Grand Prix win, Daniel Ricciardo’s salary is now lagging way behind his speed.

The Australian’s good form and decision to put contract talks with Red Bull on hold means he now languishes close to the bottom of the top-10 driver salaries.

Ricciardo signed a two-year-contract extension with Red Bull in 2016 and, without bonuses, is estimated to be on a salary of $6 million a year, as reported by TSM Sportz.

To put that in perspective, the driver currently third in the standings is making ten times less than the world’s highest paid driver, Germay’s Ferarri ace Sebastian Vettel on an estimated $60 million.

Ricciardo is currently paid $4 million a year less than his newly re-signed teammate Max Verstappen, despite being eight years his senior and bringing in 32 more championship points in the 2017 season.

Italian publication Gazzetta dello Sport last month claimed the Australian was demanding a contract worth $66 million over two years from whatever team he drives for in 2019.

On Tuesday, top ranked driver Lewis Hamilton was lukewarm on talk that the 28-year-old Ricciardo will be changing stables to join him at Mercedes next season.

“I’d imagine his future is [at Red Bull]”, said Hamilton. “He is one of the top drivers and in the top areas there are only Ferrari and Mercedes that he could even consider.

“But that is unlikely here and I don’t think that is going to happen.”

But Ricciardo is still looking beyond Red Bull despite his Monaco win, downplaying team’s championship credentials this season.

“It’s not impossible but not really at the forefront of my mind yet.”

“We’ll try to get a few more podiums but yeah, we’ve got to probably prove on at least one other circuit before the summer break that we can win again. And then maybe we’re a nice little outside chance.”

However, the reigning world champion thinks Red Bull are a real threat.

“At some stage Red Bull are going to get an engine and then they will be even closer in the mix with us,” said Hamilton.

[Ricciardo] just needs to keep his head down and do what he is currently doing.”

With Ricciardo aiming to be the first Australian in 38 years to win the Formula One world championship, many fans think it is time he moves on from Red Bull.

The UK-based Austrian team appears to be building its future around 20-year-old Verstappen.

Italian giant Ferrari is a popular option for Ricciardo, as he showed again on Sunday he’s capable of defeating Vettel and would be moving to what many regard as an immediately world title winning car.

With Raikkonen expected to leave Ferrari, Ricciardo – with his Italian heritage – would slot in perfectly as the Scuderia look for another headliner.

Ricciardo has always said the determining factor behind his decision to leave Red Bull would be the potential to win a world championship, not money.

“The biggest thing for me, the biggest motivation, and what will keep me in the sport for longer is having a competitive career and competing at the front”, he told The New Daily in March.

“So yes I have to definitely chase that as a priority.”

The Formula One season resumes in Montreal for the Canadian Grand Prix, commencing on June 10.