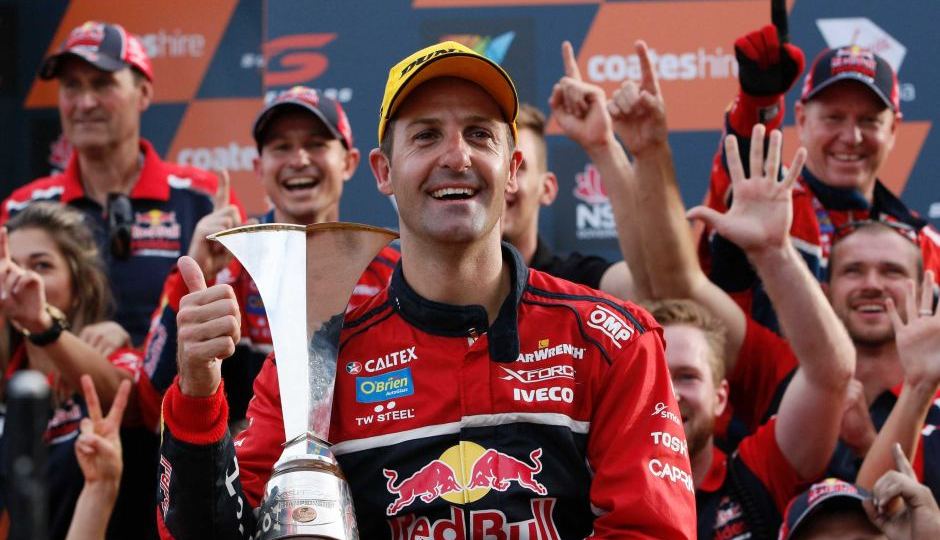 Jamie Whincup will race on in 2018 — but his future beyond that is up in the air.

Fresh off winning an unprecedented seventh Supercars title, Whincup said he will see out his Red Bull Racing contract.

“There’s nothing secretive there,” he said, the day after clinching the title.

“My contract ends at the end of next year, but would love to go on for a bit longer.”

The Holden superstar celebrated just his fourth win of the season as 24-year-old Scott McLaughlin squandered a 78-point series lead and pole position after three penalties during Sunday’s 250-kilometre race.

McLaughlin kept on fighting and got into a title-winning position before he was hit with a third penalty for what appeared to be a telling pass with three laps remaining, with the 25-second penalty confirming Whincup’s title, winning by 21 points.

Whincup said whatever he decides to do down the track, the competition is in safe hands, with drivers like McLaughlin coming through the ranks.

“He’ll have his day and go on to do great things, there are some good young kids coming through and pushing hard and hopefully the competition that we’re throwing out is helping those guys be better and yeah the sport has a great future.”

Whincup has been involved in plenty of battles on the track over the years, but he said Newcastle this weekend tops the list.

“I always hate making calls in the heat of the moment, when the emotion is so high, but when I look back on it I’ve never been involved in anything like that.”

Supercars champion Jamie Whincup says he will race on in 2018