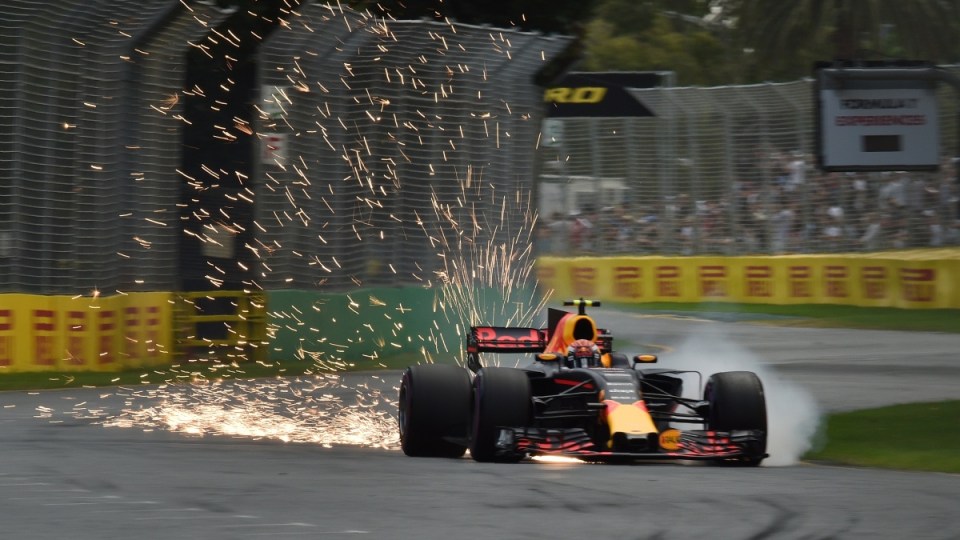 Sparks fly from Daniel Ricciardo's car during the qualifying session for the Formula One Australian Grand Prix. Photo: Getty

The rivalry between Red Bull Racing teammates Daniel Ricciardo and Max Verstappen is set to be one of the talking points of the 2017 Formula 1 Championship.

However, that has been put on hold for Sunday’s Australian Grand Prix after Ricciardo crashed out when he pushed a bit too hard on a high-speed corner early in the third session of Saturday qualifying.

“The lap in Q3 was a bit messy and turn 14 caught me out. I just went in and the rear went away,” a disappointed but uninjured Ricciardo explained.

As a result of the crash, Ricciardo was relegated to 10th place on the grid, but that could become 15th if the team is forced to replace his car’s gearbox.

The 27-year-old Australian may have been feeling the pressure not only to stay in touch with the leading Mercedes and Ferrari teams, but also to keep his nose in front of the Dutch teenager who shares his garage.

Only minutes earlier, Verstappen made it clear that he has no issue asking his team to consider him the equal of his more experienced teammate. 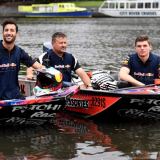 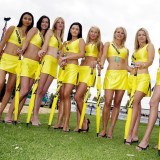 It is time to scrap ‘sexist, decorative’ grid girls from Formula One

“Never send me out after Daniel again. It’s too slow,” the 19-year-old Dutchman said over the team radio at the start of the second qualifying session.

While the comment was likely prompted by the tyres on the two cars being at different stages of the heating-up process, it reinforced the belief that Verstappen won’t play second fiddle to Ricciardo.

Verstappen, son of former Formula 1 driver Jos, announced his arrival in the premier motorsport championship when he won his debut race for Red Bull in Spain last year, becoming the youngest-ever winner of a Grand Prix at just 18.

Throughout practice and qualifying around the Albert Park street circuit, the Red Bulls were slightly off the pace set by Mercedes and Ferrari, as two-time winner Lewis Hamilton claimed pole position in Melbourne for the fourth year in a row.

The Briton just held off Ferrari’s Sebastian Vettel as the top four put in their fastest laps at the end of qualifying.

Hamilton’s time of 1 minute 22.188 seconds was significantly faster than the 1:23.837 that was good enough for pole last year, and nearly three-tenths quicker than Vettel, who edged out Hamilton’s new Mercedes teammate Valtteri Bottas to grab a place on the front row.

Vettel’s Ferrari teammate Kimi Raikkonen will start alongside Bottas on the second row, with Verstappen fifth fastest some 1.3 seconds off Hamilton’s pace.

“It’s been a fantastic weekend so far and it’s amazing to come here for the 11th time … and I’m just incredibly proud of my team,” Hamilton said.

“It’s going to be a tight race this year.”

Hamilton was able to turn only one of the past three pole positions in Melbourne into a win, in 2015, with now-retired teammate Nico Rosberg winning in 2014 and last year. Hamilton’s previous win at Albert Park was in 2008.

With new, wider cars and a new clutch system, the most unpredictable part of the race will be the start and the sprint to the first corner, where many drivers have come to grief in previous years.

The lights turn green on the Australian Grand Prix, and with it the 2017 Formula 1 Championship, at 4pm AEDT. The race is scheduled over 58 laps.