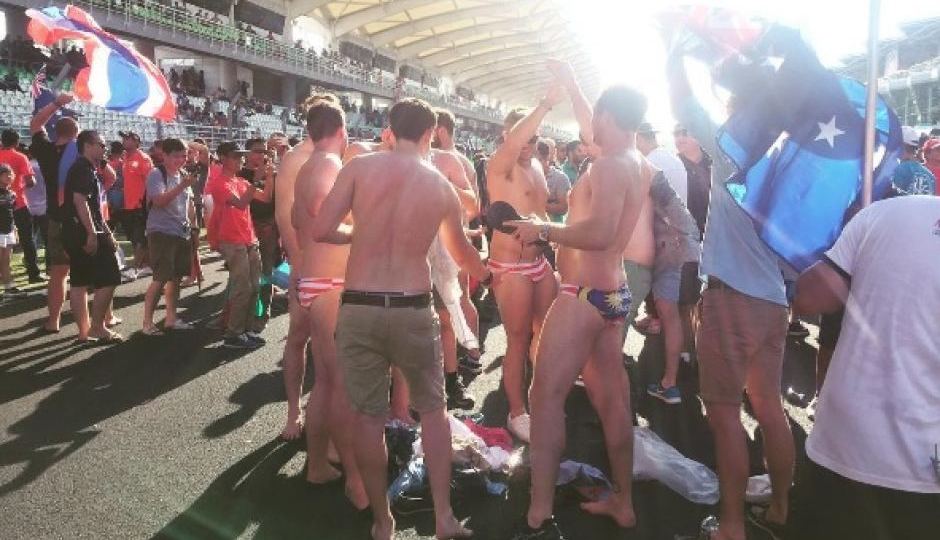 Police in Malaysia have said they hope to charge a group of Australians who were arrested for allegedly stripping at a Formula One race.

A police spokesman in Kuala Lumpur told the ABC they hoped to charge the group under section 504 of the penal code, which carries a maximum two-year jail term for intentional insult with the intent to provoke a breach of the peace.

The minimum penalty for that charge is a fine.

The nine Australian men were pictured during post-race celebrations on the weekend wearing only swimwear that featured the Malaysian flag.

Pictures of them celebrating in a circle with their pants around their ankles were posted on social media. They were holding up an Australian flag, while wearing the Malaysian-themed underwear with the words “budgy smuggler” across the back. 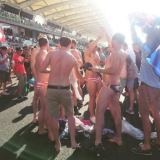 Video footage also shows the men drinking from shoes – an act known as a “shoey”, which is a celebration commonly seen in motorsports.

The men, including a staffer from Minister Christopher Pyne’s office, are receiving consular assistance.

The former army reservist has also worked for Macquarie Bank, according to his online profile.

A spokeswoman from Mr Pyne’s office told the ABC: “This matter is being handled appropriately by the Australian High Commissioner. Until we have a clearer picture of the process at hand it would be unwise to comment further.”

The Deputy Public Prosecutor will make the final decision on whether to lay charges.

Police say if the men are charged, they could appear in court next Monday.

“This shows a huge lack of respect to us as Malaysians; this is stupid behaviour from foreigners who have no sense of cultural sensitivity and respect.

“It embarrasses their own country as well, it gives Australians a bad name.”