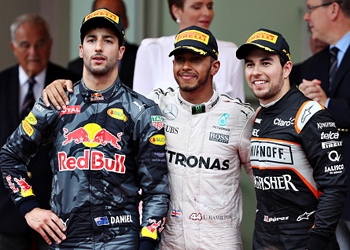 Daniel Ricciardo’s wretched run of luck has continued at Formula One’s European Grand Prix, with tyres this time costing him a shot at a podium finish.

The 26-year-old Australian sunk to a seventh place finish despite starting on the front row of the grid after he and Red Bull teammate Max Verstappen were forced to switch to a two-stop strategy early in the race at Baku in Azerbaijan.

Ricciardo, had maintained his second spot early but was forced to pit in the seventh lap after his super soft tyres gave way, before again stopping midway through the race for mediums.

“We couldn’t keep the grip in them and the temperature out of them.

“It was a bit unexpected as we race in some hot places and Singapore for example is one of our stronger venues.

“We didn’t expect to suffer with that but that was our biggest limitation and we need to understand why.

“The two-stop strategy wasn’t the plan but we were forced into it.”

It’s the fourth time Ricciardo’s podium hopes have been dashed by non-driver issues in as many races.

Ricciardo was left livid after the Monaco Grand Prix last month when Red Bull failed to have tyres ready for a pit stop, costing him a maiden victory at the track as he finished second behind Lewis Hamilton.

He also lost time at the Canadian Grand Prix last month due to a fumbled pit stop, while he blamed a mid-race strategy change at the Spanish Grand Prix for costing him a possible victory after he led that race early.

German driver Nico Rosberg, who leads the championship by 24 points, won in Azerbaijan in comfortable fashion.

The Mercedes driver led from the first turn and was never headed, finishing more than 16 seconds quicker than the second-placed Sebastian Vettel of Ferrari.