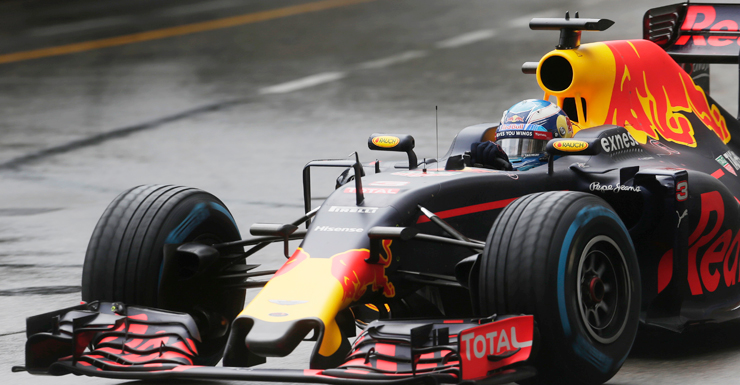 Ricciardo was robbed of a chance of the biggest win of his career as a result of the pit stop blunder.

“We presented it to Mercedes,” Marko said.

“Unfortunately, a lot of misunderstanding and not the right communication.

“We will investigate and find out, but it was a human mistake. I feel really sorry and all I can do is apologise to him (Ricciardo).”

Ricciardo, who qualified in pole position, was in first place when he moved into the pits on lap 33 on Sunday night.

But a slow tyre change cost him the lead. The Australian was left waiting for an extended period because his Red Bull pit crew was unprepared. The delay allowed Lewis Hamilton, who opted not to change his tyres early, to seize the top spot and go on to win the race.

A clearly disappointed Ricciardo said he was “screwed” in a post-race interview.

“I don’t want to comment on the race to be honest, just say thanks to the fans, thanks for sticking out in this weather,” he told the interviewer.

“From the outset we put on a show. It shouldn’t have been as exciting as it was, to be honest, but two weekends in a row now I’ve been screwed, so it sucks. It hurts.”

This was a reference to the Spanish Grand Prix. Ricciardo led early but fell to fourth after he was instructed to pit for a third time. His Red Bull teammate Max Verstappen, who only pitted twice, won the race, becoming the youngest-ever winner of a F1 Grand Prix.

Prompted by the interviewer, Ricciardo said he had “no idea” what went wrong during the pit stop. “Nope, no idea. I was called into the box, I didn’t make the call, so they should have been ready and, yeah, it hurts, it hurts.

“I think we had the speed in the wet on the start. We pulled away, pitted for [inaudible] and then we put ourselves in a race with Lewis which we didn’t need to be in and then the pit stop was the pit stop.

“I felt I was the quickest in all conditions, but again second place doesn’t show much for it.”

Red Bull Racing described the incident as a “miscommunication” on Twitter.

Some of Ricciardo’s angry response to his team after the stop was broadcast on television: “Just save it. Nothing you can say is going to make it better. Just save it.” The rest was bleeped for profanity.

The rain-swept Grand Prix started under a safety car, which did not leave the track until the seventh lap, making it the slowest start ever seen in Monaco.

Verstappen was one of several drivers who crashed out in the wet conditions.

Hamilton’s Mercedes teammate and championship leader Nico Rosberg finished seventh — 93.2 seconds behind — after being told to let the Briton past early on. His championship lead over Hamilton fell to 24 points as a result.

Ricciardo was certainly exceptionally unlucky. Would’ve been interesting to see Hamilton vs Ricciardo without the pit-stop blunder. #F1

At least Ricciardo can know that with new Top Gear starting today, that his pit stop won’t be the most disappointing thing today #F1

Ricciardo looks like he is about to go and punch his entire crew for bottling his win in the pit stop.

Ricciardo will be fuming even if he doesn’t show it, cos that was literally his race, the only thing that went wrong was the one pit-stop