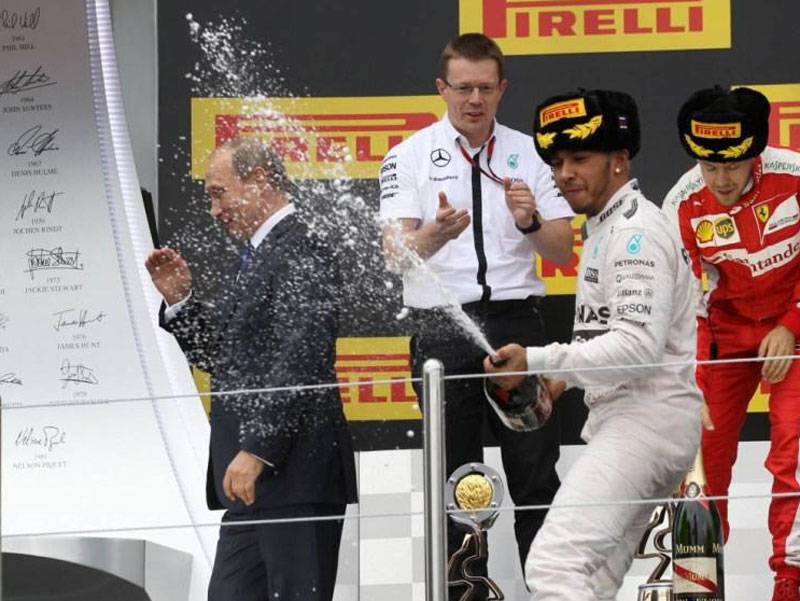 Lewis Hamilton is Formula 1’s force to be reckoned with, but a good dose of excitement gets to even the best of racing’s elite.

The British Mercedes driver took out the Sochi Grand Prix on Sunday, as Russian President Vladmir Putin looked on from the stands.

The controversial, but locally popular, leader took time off from directing airstrikes in Syrian territory and taking part in tough, manly, shirtless photoshoots, to attend the race and present the drivers with their winnings.

Despite success on the track, it was off the track that Hamilton really left his mark – at the cost of Mr Putin’s, probably, outrageously expensive suit.

Hamilton, wearing a novelty cossack-style hat, sprayed Mr Putin with champagne as he walked off stage, but was seemingly oblivious to the daring direction his celebrations had taken.

Security guards quickly engulfed the Russian leader as he walked off stage.

The run-in with the Russian strongman, a popular force in his home country but portrayed as an erratic and il-aligned leader in the west, was not missed by users on social media.

The win put Hamilton one step closer to his third world championship, with nine wins from 15 starts.

He has stormed ahead of his opposition in the race for the world title and is now 66 points ahead of the second-placed Sebastian Vettel, who drives for Ferrari.

Mercedes team mate Nico Rosberg, who qualified in pole position, was forced to retire early in Sunday’s main race after problems with the throttle made his car undrivable.

“I was really taking it in, just looking at the car,” Hamilton said after the win, Sunday Express reported.

“I don’t know how many times I’ll be in that position again, so really cherishing the moment and feeling really blessed. I love driving this car and I love where we are at the moment.”

Hamilton’s reception of Mr Putin after winning the 2014 Sochi Grand Prix also attracted attention, after he appeared oblivious to the Russian leader in the podium ante-room, walking straight past him.

See the video below.

Why Lewis Hamilton is next on Putin’s hit list